North Korea accidentally bombed one of its own cities after failed missile test, report says

A new report on Wednesday revealed that North Korea accidentally bombed one of its own cities after a missile launch test failed this past April.

The Diplomat first reported on the failed missile test, a Hwasong-12 intermediate-range ballistic missile that was launched from Pukchang Airfield in the South Pyongan Province on April 28, 2017.

The missile’s engines reportedly failed after just one minute into the flight, resulting in “catastrophic failure,” The Diplomat reported, citing a “U.S. government source with knowledge of North Korea’s weapons programs.”

The missile didn’t fly higher than 70 kilometers, or about 43 miles, and it crash-landed dangerously close to a highly populated town.

The Diplomat exclusively reported on the location of the missile crash, which was in Tokchon, a city that has a population of about 200,000 North Koreans. The crash landing reportedly caused extensive damage to a complex of industrial or agricultural buildings, The Diplomat said. 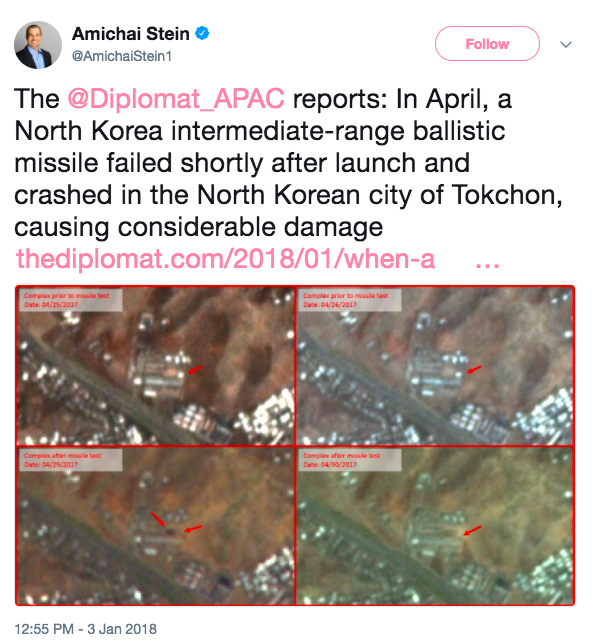 One of North Korea’s failed missile tests in 2017 accidentally bombed one of its own towns, according to a new report. (Twitter)

“The location of the missile’s eventual impact was revealed exclusively to The Diplomat and evidence of the incident can be independently corroborated in commercially available satellite imagery from April and May 2017,” it reported.

The Diplomat explained how the liquid-fueled missile likely crashed and caused a “large explosion” in the city, and from Google Earth images, it looks like the crash site was very close to residential and commercial buildings.”

“It’s impossible to verify if the incident caused any loss of life and, given the time of day the test occurred and the location of the impact, it may be likely that few, if any, casualties resulted from the incident,” The Diplomat pointed out. “However, as the Google Earth imagery of the incident demonstrates, the Tokchon facility is located adjacent to what appear to be residential and commercial buildings. A slight difference in trajectory may could have resulted in an even more catastrophic accident over a populated region.”

North Korea launched an ICBM over Japan into the Pacific Ocean on Sept. 14, and then again on Nov. 29 of last year.

The September 2017 ICBM test marked its sixth ever successful nuclear missile launch, and North Korea claimed the country also has a Hydrogen bomb it can place on an intercontinental ballistic missile.