The National Football League (NFL) decided not to run a Super Bowl ad by a veterans organization that would ask people to stand for the national anthem, according to Military Times.

The country’s largest veterans service organization, AMVETS (American Veterans), was offered the opportunity to create an ad in the Super Bowl LII program, which would have cost the group $30,000.

The ad says “Please Stand” with a picture of a service member saluting the American flag. 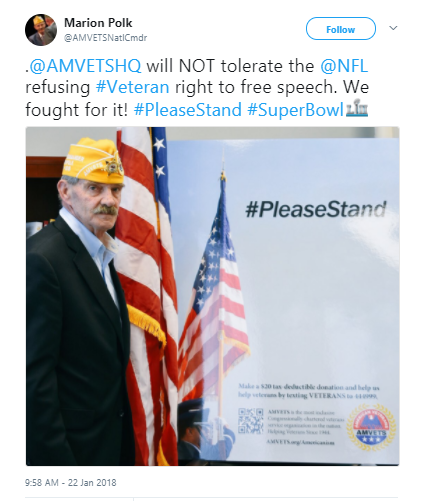 An NFL spokesman issued a statement explaining why the ad was not accepted.

“The Super Bowl game program is designed for fans to commemorate and celebrate the game, players, teams and the Super Bowl,” NFL spokesman Brian McCarthy told USA Today Sports. “It’s never been a place for advertising that could be considered by some as a political statement. The NFL has long supported the military and veterans and will again salute our service members in the Super Bowl with memorable on-field moments that will be televised as part of the game.”

McCarthy said AMVETS had an opportunity to change the wording in the ad from “Please stand” to other options such as “Please Honor Our Veterans” or “Please Stand for Our Veterans.”

An ad for the Veterans of Foreign Wars reading “We Stand for Veterans” was approved by the Super Bowl program.

“We looked to work with the organization and asked it to consider other options such as ‘Please Honor our Veterans,'” McCarthy said. “They chose not to and we asked it to consider using ‘Please Stand for Our Veterans.’ Production was delayed as we awaited an answer. As the program was going to production, the organization asked about including a hashtag and was informed that approval would not be provided in time and was asked to approve the ad without the hashtag. The organization did not respond and the program ultimately went into production to meet deadlines.”

Joe Chenelly, Executive Director of AMVETS, told USA Today that he wanted AMVETS to express its freedom of speech just like certain players were by kneeling during the national anthem.

“The protests are very much out of our purview,” he said. “We were not looking to comment on those. This is part of our Americanism program in which the organization conducts seminars in schools and with youth groups on the proper way to display, care for and respect the flag.”

Chenelly said the same ad they gave to the NFL was approved by the NBA and NHL for their All-Star games.

AMVETS National Commander Marion Polk wrote a letter to NFL Commissioner Roger Goodell and said: “Freedom of speech works both ways. We respect the rights of those who choose to protest, as these rights are precisely what our members have fought — and in many cases died — for. But imposing corporate censorship to deny that same right to those veterans who have secured it for us all is reprehensible.”