Defense Secretary Jim Mattis has assured Russia that they have no reason to be concerned about the U.S. decision to supply Ukraine with “defensive” weapons, according to Military.com. 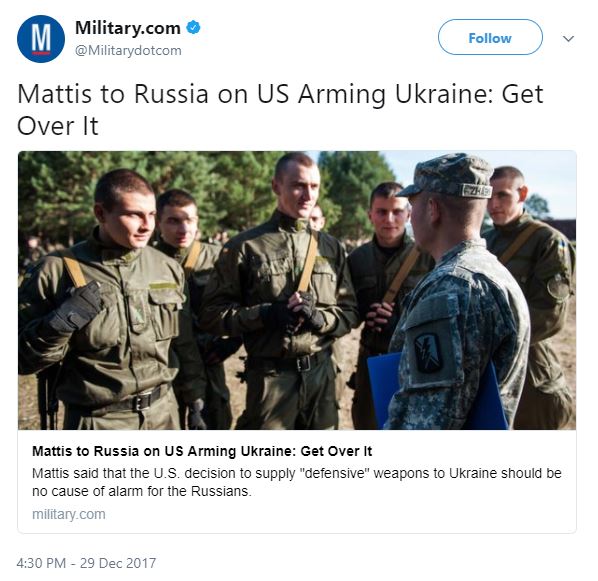 The Trump administration recently approved Ukraine’s request for defensive weapons, which was delayed by the Obama Administration despite being recommended by the Defense Department. Ukraine is now permitted to buy ammunition, sniper rifles and scopes from U.S. manufacturers. President Donald Trump has also given Ukraine approval to obtain Javelin anti-tank missiles.

The Trump Administration’s decision was applauded by Republican Sen. John McCain who, according to The Ukrainian Weekly, said: “President Trump’s reported decision to provide Javelin anti-tank munitions to Ukraine marks another significant step in the right direction and sends a strong signal that the United States will stand by its allies and partners as they fight to defend their sovereignty and territorial integrity. This decision is years overdue. … Providing Ukraine the capabilities it needs to deter and defend against further Russian aggression will contribute to creating more stable security conditions that are necessary for a peaceful resolution of this conflict. … Providing defensive lethal assistance to Ukraine is not opposed to a peace in Ukraine – it is essential to achieving it.”

Russian Deputy Minister of Foreign Affairs Sergei Ryabkov responded to the Trump Administration’s decision and said: “The United States has crossed a line by announcing its intention to supply lethal weapons to Ukraine.”

“U.S. weapons are capable of leading to new casualties in our neighboring country, and we cannot remain indifferent to that,” he added.

Mattis has continued to remind Russia that the weapons that are being supplied to Ukraine from the U.S. are strictly to be used for defense purposes.

“As long as no one wants to invade Ukraine, hopefully it won’t have any big impact. They’re defensive weapons,” Mattis said.