North Korea did not react to the accidental emergency alert sent by the Hawaii Emergency Management Agency warning of a ballistic missile strike on Saturday, Secretary of Defense James Mattis told NBC News.

“No. There is no information like that that I have,” Mattis told NBC News when asked if North Korea had a reaction toward the false emergency missile alert. 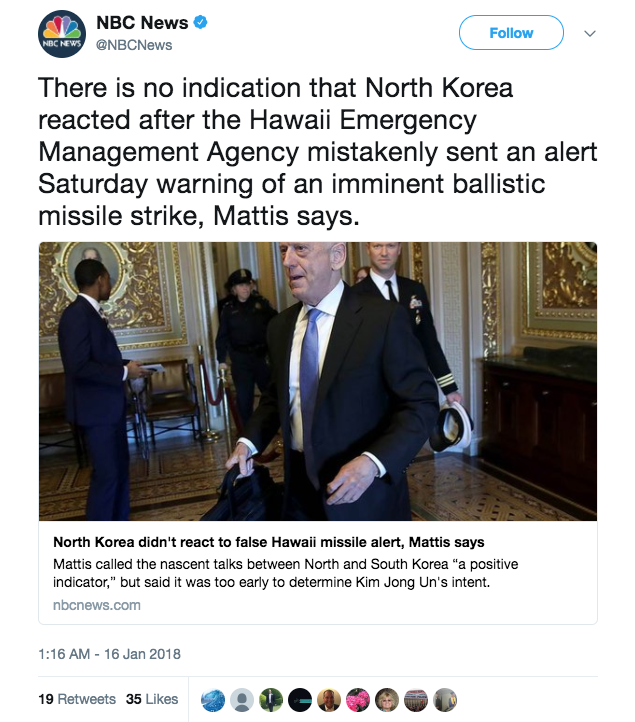 Earlier this month, North Korea reopened a military hotline with South Korea to open a direct dialogue with the country, in an effort to ease tensions over the course of the past two years.

Mattis also said the U.S. has military options if diplomatic talks were to fail with North Korea regarding its nuclear missile program.

Just a few minutes after 8:00 a.m. local time in Hawaii, an employee at the Hawaii Emergency Management Agency initiated a routine internal test by clicking the “Missile alert” button in a computer program as opposed to the “Test missile alert” button on the drop down menu.

Hawaiian residents and tourists then received an alert reading: “BALLISTIC MISSILE THREAT INBOUND TO HAWAII. SEEK IMMEDIATE SHELTER. THIS IS NOT A DRILL.”

Thousands of people panicked as they saw the alert. It wasn’t until about 38 minutes later that another alert was sent saying the first alert was a mistake.

Changes to the alert system are already being made. Two people, rather than one, will now be necessary for the activation and verification of the alert. An alert cancellation is also readily available and can be issued within seconds if there is a problem.

Here is Chelsea Manning's first video ad for US Senate