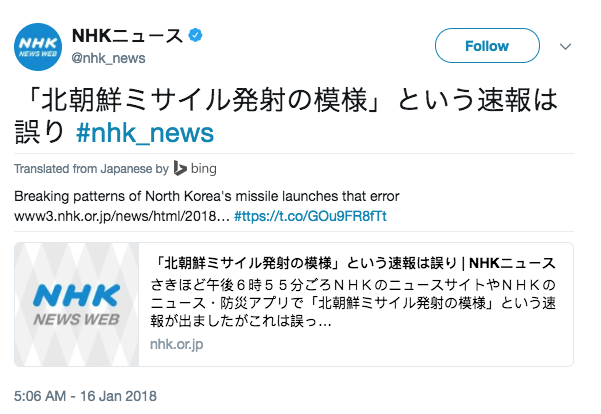 “Around 6:55 p.m. earlier we reported on the NHK’s news site and NHK’s news disaster prevention application ‘Pattern of North Korean missile launch’ but this was incorrectly issued. J alert has not appeared. I must sincerely apologize,” NHK said, RT reported.

This false report comes on the heels of a false missile alert that Hawaii sent to its residents in the U.S. over the weekend.

“BALLISTIC MISSILE THREAT INBOUND TO HAWAII,” read the alert. “SEEK IMMEDIATE SHELTER. THIS IS NOT A DRILL.”

Hawaii’s Emergency Management later said the missile alert was an error, and that an operator had accidentally hit the wrong button, which sent the alert to residents, rather than just a test.

“State Warning Point has issued a Missile Alert in ERROR,” tweeted Oahu Emergency Management. “There is NO threat to the state of Hawaii!”