ISIS terrorist planned to blow up Statue of Liberty with bombs

Munther Omar Saleh, 21, plotted to use pressure cooker bombs to blow up the Statue of Liberty or carry out an attack on Times Square in 2015. (YouTube)
January 16, 2018 Peter Reid
Share
Tweet
Flip

A member of ISIS tried planning to blow up the Statue of Liberty in New York City with pressure cooker bombs, but the plan was foiled, ABC recently reported.

Munther Omar Saleh, 21, plotted to use pressure cooker bombs to blow up the Statue of Liberty or carry out an attack on Times Square in 2015. 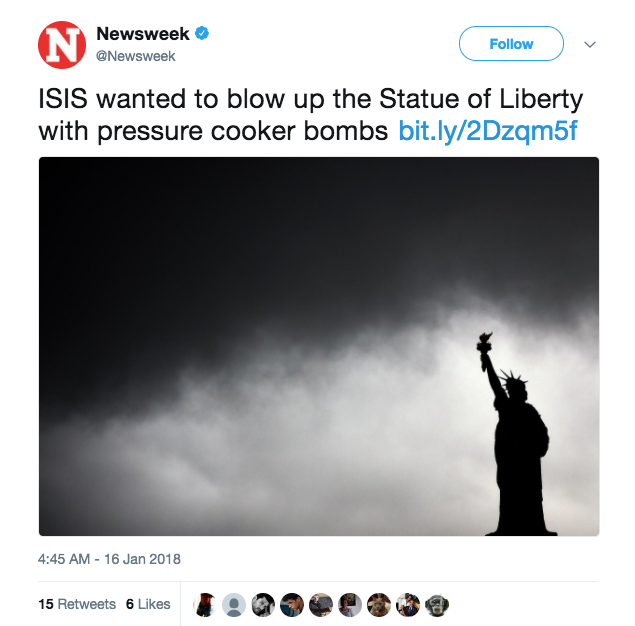 According to new court filings from Jan. 12 regarding the sentencing of Saleh and Fareed Mumuni, the two men were conspiring and attempting to provide material support to ISIL (Islamic State of Iraq and the Levant). The two men also face charges of assaulting and conspiring to assault a federal officer. And Saleh received instructions on how to construct a pressure cooker bomb from Syria-based ISIS attack facilitator Junaid Hussain.

In a communication found on his phone to Hussain, Saleh wrote down his attack plans for New York City.

“But I was considering that The Statue of Liberty has a very weak point in its lower back and it’s tilting forward, if I can get a few pressure cooker bombs to hit the weak point, I think it will fall face down, along with the mushrikeen [those who worship one other than Allah] visiting it,” Saleh said, according to the court filings.

“Or we can hit Times Square which would be easier, but if I can get more akhs, we can preform simultaneous attacks all around NYC,” he said, according to court filings.

Saleh and Fareed Mumuni were both arrested in June 2015 and later pleaded guilty to “all charges in an indictment charging him with conspiring and attempting to provide material support to the Islamic State of Iraq and the Levant (ISIL), and with assaulting and conspiring to assault federal officers,” according to U.S. Department of Justice release.

Concealed carry tips that are 'outside the box'