An ISIS affiliate in northwestern Africa claimed responsibility for the attack in Niger that killed four U.S. soldiers and five Nigerian troops last October, according to a statement given to the Nouakchott News Agency.

“We declare our responsibility for the attack on the U.S. commandos last October in the Tongo Tongo region of Niger,” said ISIS leader Adnan Abu Walid al-Sahraoui, according to The New York Times. 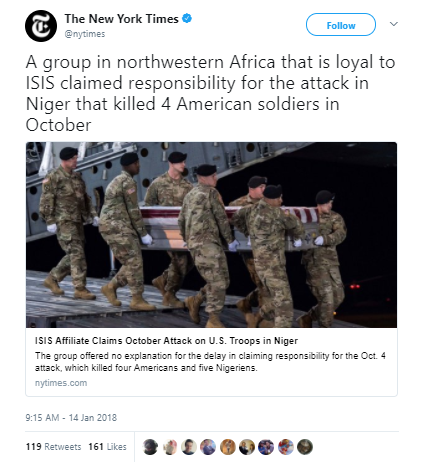 The U.S. soldiers, along with 30 Nigerian forces, were attacked by roughly 50 militants with small arms fire and rocket-propelled grenades.

Details surrounding the deaths of the four American soldiers haven’t been clear since October. Last month, The Associated Press reported that Sgt. La David Johnson was killed by enemy fire. It had been reported that Johnson had been found dead with his hands bound, which might have indicated he was captured and executed.

The Associated Press reported that its new findings came from U.S. officials who spoke anonymously because the investigation has not been finalized yet:

“An American soldier killed in an ambush in Niger with three comrades but recovered days later wasn’t captured alive by the enemy or executed at close range, The Associated Press has learned, based on the conclusion of a military investigation.

Dispelling a swirl of rumors about how Sgt. La David T. Johnson, 25, of Miami Gardens, Florida, died, the report has determined that he was killed by enemy rifle and machine gun fire as he fled the attack by an offshoot of the Islamic State group about 120 miles (200 kilometers) north of Niamey, the capital of the African country. The attack took place Oct. 4; Johnson’s body was recovered two days later.”

In October, Joint Chiefs Chairman Gen. Joseph Dunford said in a press conference that the 12-person Special Forces team, as well as the Nigerian troops, were on a reconnaissance mission and were not expecting enemy combatants.

Roughly 800 American troops are in Niger working to fight against extremist groups such as Boko Haram, ISIS and al-Qaeda.