Government protests in Iran might have calmed, but the two-week movement continues to draw international attention, as new reports reveal that protestors are being tortured and possibly even killed while in custody. And, many of those Iranians in custody are being held without charges against them.

One Iranian spoke to Fox News from outside Evin Prison in northern Tehran and said that people in custody are being tortured – “maybe tortured to death.” The Iranian is a 31-year-old activist and business owner whom Fox said declined to give his last name out of fear.

Amir told Fox that one of his friends was arrested “by plainclothes police at the beginning of the protests in Tehran. […] Then he was beaten badly. He said 400 to 500 people were forced into a room that should only hold 120 persons. They suffered all the torture – sleep deprivation, lack of food, all the things.”

Fox reported that Amir said conditions inside the prison are “beyond abhorrent,” and that prison officials are attempted to force detainees to film videos insisting they’re being treated well, known as “stage managing.”

“People are very concerned about the health of the arrested people. Mothers are there and they don’t know anything about their child’s situation, or even if they are alive,” another protestor told Fox.

Protests began late last year, on Dec. 28, in Iran’s second largest city and one of Iran’s holiest places, Mashhad, due to the country’s high inflation, economic policies and economic inequality, and unemployment. The protests have spread to more cities and the message has turned more toward regime change. 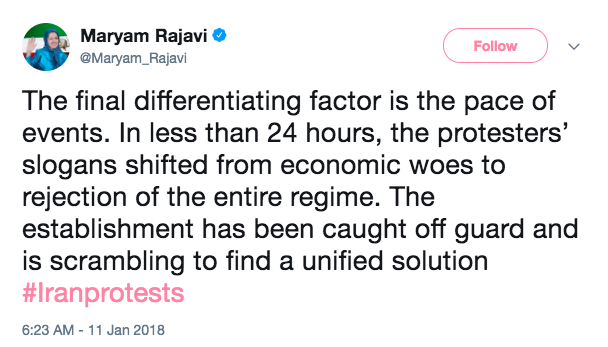 The protests in Iran have calmed, but there are now reports of torture. (Twitter)

The White House Press Secretary released a statement on Wednesday calling for the immediate release of all protestors, following reports of torture and death.

The Trump Administration is deeply concerned by reports that the Iranian regime has imprisoned thousands of ‎Iranian citizens in the past week for engaging in peaceful protests. Further reports that the regime has tortured or killed some of these demonstrators while in detention are even more disturbing. We will not remain silent as the Iranian dictatorship represses the basic rights of its citizens and will hold Iran’s leaders accountable for any violations. The protesters in Iran are expressing legitimate grievances, including demanding an end to their government’s oppression, corruption, and waste of national resources on military adventurism. Iran’s regime claims to support democracy, but when its own people express their aspirations for better lives and an end to injustice, it once again shows its true brutal nature. ‎The United States calls for the immediate release of all political prisoners in Iran, including the victims of the most recent crackdown.

These are the biggest waves of protests since the nationwide protests in 2009 that the world watched through Twitter.

At this point, more than 3,000 people have been detained as the protests have spread all across the country. Many Iranians in custody are being detained without charges. It is believed that at least 21 people have died because of the protests.

It was reported two detainees apparently took their own lives – including 23-year-old Sina Qanbari, but Iranians aren’t buying that story, Fox reported. 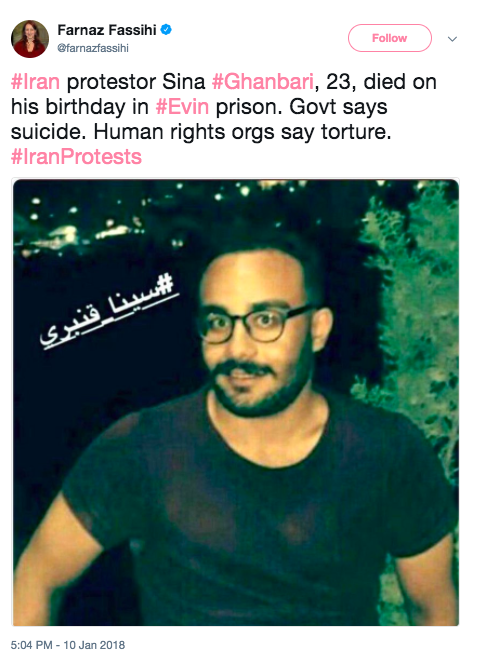 The protests in Iran have calmed, but there are now reports of torture. (Twitter)

“Sina went in there a healthy 23-year-old,” Dokhi Fassihian told Fox. Fassihian is a senior program manager for the Middle East and North Africa Programs with Freedom House, an independent watchdog group. “No one should believe that he just took his own life. There are urgent concerns of mistreatment, and we should all be speaking out.”

It became challenging to find protestors’ firsthand accounts of what’s happening in Iran, as the government cut off some of the internet to its people shortly after the protests began, including the most popular communication app in the country, Telegram, and others such as Instagram. It is estimated that half the country uses the messaging app Telegram.

The Islamic Revolutionary Guard Corps (IRGC), a branch of Iran’s Armed Forces, has said protestors should cease their actions. The IRGC has also come out and tried to say the protests are over, but it is clear the Iranian people are still speaking out. Trump has called the IRGC a “corrupt personal terror force.”

Iranian President Hassan Rouhani has recognized the people’s right to peacefully protest but warned that security forces would not tolerate vandalism and chaos. And, the grave penalty for speaking out against the Iranian government is death, if convicted.

President Donald Trump and the White House have come out in support of the protestors, and they have criticized the Iranian government for sponsoring terrorist groups around the Middle East. Trump also warned that he and the United States are watching for human rights violations, and that the U.S. could impose sanctions if such violations occur.

“The people of Iran are finally acting against the brutal and corrupt Iranian regime,” Trump has tweeted. “All of the money that President Obama so foolishly gave them went into terrorism and into their ‘pockets.’ The people have little food, big inflation and no human rights. The U.S. is watching!”

Journalist Omid Memarian had posted a thread on Twitter that explained what might have sparked this uprising. In the thread, he says President Rouhani said in December that there are government funds for “various things,” and that “no one knows who’s in charge.”

Trump has criticized Iran and called the country out for funding terrorists and creating a dangerous missile arsenal. The President has also pointed to the Iran nuclear deal that was drawn up in 2015, calling it “one of the worst” and “the most one-sided transaction the United States has ever entered into.”

Trump said the “rogue regime” of Iran is only perpetuating terrorism around the world, and is becoming more aggressive in doing so.

“The Iranian dictatorship […] remains the world’s leading state sponsor of terrorism,” the President has said, saying the regime provides assistance to al-Qaida, the Taliban, Hezbollah, Hamas and other terrorists.