A German rapper who joined ISIS has been killed in Syria, according to photos provided by the pro-ISIS Wafa Media Foundation, the SITE Intelligence Group has reported. 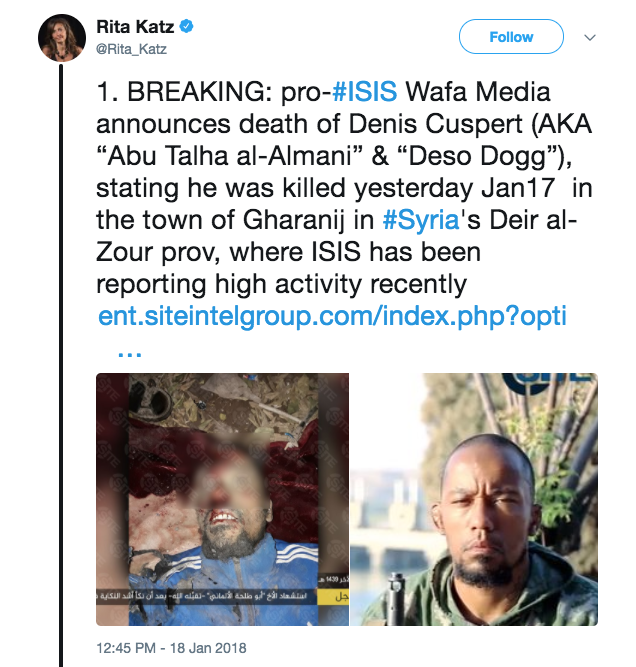 Wafa Media Foundation posted pictures of Cuspert’s corpse online. Reports of Cuspert’s death in the past were unfounded, as he was later seen in ISIS propaganda videos. In one video, Cuspert held the severed head of a person executed by the group.

Wafa Media said Cuspert was killed in an airstrike, but that he had killed 10 enemies before dying, Voice of America News reported. U.S. officials said the anti-ISIS coalition did not carry out any airstrikes in the area, even though it was reported in some places that it had been a U.S. airstrike.

Cuspert converted to Islam in 2007, but was introduced to more radical Islamic ideologies following a near-fatal car crash in 2010, according to The Guardian. In 2012, Cuspert left Germany for Egypt and reached Syria in 2013, where he joined Al Qaeda. Later on, he joined ISIS and was designated a Global Terrorist in 2015.

Cuspert was targeted in a 2015 airstrike and was believed to have been killed, but it was later determined he survived, VOA News reported.

In June 2014, Cuspert married FBI translator Daniela Greene, who was a part of a team sent to investigate him. According to court testimony, the two communicated online and fell in love via a Skype account.

Greene said she was heading to Germany to see her parents, but instead flew to Turkey, according to The Guardian. She then joined Cuspert in Syria.

Shortly after getting married, she returned to the United States, pleaded guilty to terror-related charges and served two years in prison.