Luis Bracamontes began with an outburst during his trial on Tuesday, saying he would escape and kill more police officers.

“I wish I had killed more of the motherf**kers,” Bracamontes said during the trial.

“I will break out soon and I will kill more, kill whoever gets in front of me … There’s no need for a f**king trial,” he said with a smile on his face. 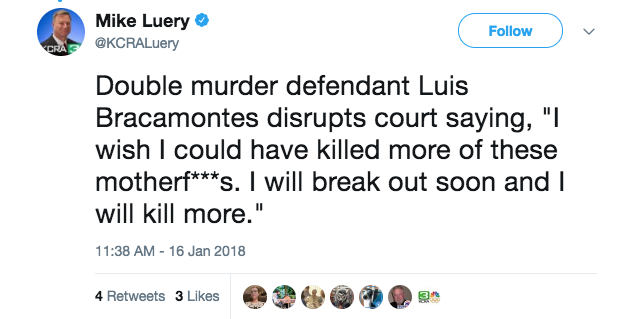 “Let me be clear and up front,” public defender Jeffrey Barbour told the jury, according to The Sacramento Bee. “Mr. Bracamontes is responsible for the death of Deputy Danny Oliver and Detective Michael Davis. He shot them both.”

“You will not disrupt this trial, you will not speak out,” White said. “If you do, you will be removed from the courtroom.”

Barbour and his partner Norm Dawson asked the judge to reconsider allowing Bracamontes to plead not guilty for reasons of insanity. They said he wasn’t sane enough to stand trial.

Dawson said Bracamontes would continue with his outbursts because he believes the trial doesn’t matter and that he can’t be killed.

“He simply does that because he believes he can’t be killed,” Dawson said.

White rejected the motion and said Bracamontes is competent to stand trial.

“F**k all the stupid cops and f**k the families, too,” Bracamontes said, directing his attention toward the families of deputies Danny Oliver and Michael Davis Jr.

Bracamontes could face up to life in prison or the death penalty.

According to Bracamontes’ history, he has been arrested a number of times and has been deported twice.