On Tuesday, the North Korean newspaper Rodong Sinmun published an editorial piece that called Trump’s comments “the spasm of a lunatic.”

On Jan. 2, Trump had tweeted: “North Korean Leader Kim Jong Un just stated that the’Nuclear Button is on his desk at all times.’ Will someone from his depleted and food starved regime please inform him that I too have a Nuclear Button, but it is a much bigger & more powerful one than his, and my Button works!”

North Korea has lashed out in response.

“The spasm of Trump in the new year reflects the desperate mental state of a loser who failed to check the vigorous advance of the army and people of the DPRK [Democratic People’s Republic of Korea],” the commentary said, The Associated Press reported. “He is making (a) bluff only to be diagnosed as a psychopath.” 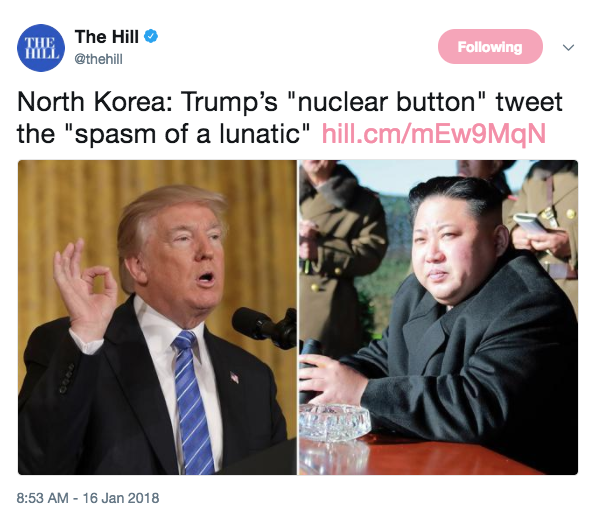 That type of language is common for North Korea, who has frequently called President Trump names and responded to Trump’s own comments and tweets about North Korea.

On New Year’s Day, North Korean dictator Kim Jong Un had said his “nuclear button” is on his desk, and he warned that the entire United States is within its range.

Kim aggressively threatened the U.S. and said” “The entire mainland of the U.S. is within the range of our nuclear weapons and the nuclear button is always on the desk of my office. They should accurately be aware that this is not a threat but a reality.”

“No matter how much America wants to attack us with their military might and nuclear power, they know that now we possess such great nuclear power and therefore they will not dare,” he had continued.