In 2009, Connie and Bob Bade started a tradition of baking cookies for deployed soldiers. The Bades would choose a day each year to bake thousands of cookies that they would package and send all over the world. The tradition lasted for five years, until Connie Bade passed away. During those five years, the couple sent more than 15,000 cookies.

Now, the Bade family is planning on starting the tradition up once again. Dan Bade, Connie and Bob Bade’s grandson, has enlisted the support of 20 family members to help bring back the Cookies on Deployment initiative.

The baking extravaganza is scheduled for Feb. 4. This day was chosen because it will help bring cheer to the troops after the holiday rush, during a time when packages and letters begin to decline. Dan Babe’s goal is to bake, package and send 4,000 cookies total.

Each recipient will receive five dozen homemade cookies that they can share with those who are stationed with them.

“We’re doing (this) for two reasons: we want to remember our grandmother, but we also want to do something for the troops,” Dan Bade said. “There’s so little we can do. There’s such a feeling of helplessness when we’re sitting at home and they’re there. This is something little, but hopefully, it’s something that makes their day.” 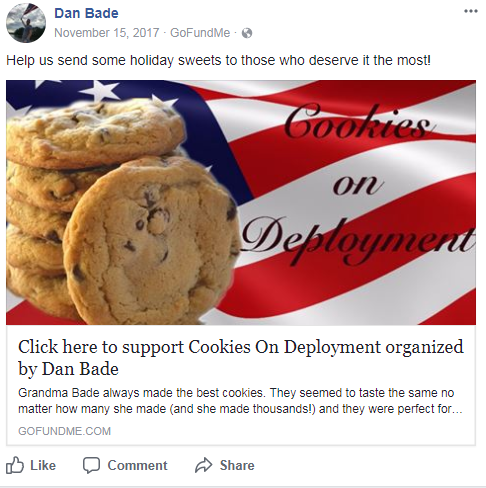 The cost of this initiative comes at a price.

While baking the cookies is cheap, shipping them can be extremely costly. Some packages of cookies will cost $15 each to send overseas.

The Bade family has set up a GoFundMe page to collect donations so they can send as many cookies as possible to the troops. The page says that all donations will go toward baking ingredients, stationary for handwritten notes and shipping costs. So far, Cookies on Deployment has raised $215 of their $3,000 goal.

Cookies on Deployment is also seeking the names and addresses of service members who would like to receive a package of cookies. If you know of a loved one who is deployed, you can send their information to [email protected].

Handwritten letters are also being collected to send to military personnel, along with the dozens of homemade cookies. Letters are being accepted with a donation or in lieu of a donation. Letters can be mailed to: Cookies On Deployment, 919 Delaware Ave., Ames, IA 50014.