After being forced to wait 19 days for dental treatment, a veteran was left with a hole in his face. (Matthew Doc Perry/Facebook)
January 11, 2018 Melissa Leon
Share
Tweet
Flip

Countless veterans depend on the VA for health care. But one veteran ended up with a hole in his face that has left a permanent scar, after he had to wait more than two weeks for a dental appointment. Despite meetings with top VA officials, nothing has happened to remedy the situation or ensure it won’t happen to others. Despite at least eight calls from his attorney, the VA has still done absolutely nothing.

This is the VA that many veterans sadly know too well, and whose horrible experiences go unaddressed and pushed aside far too often.

That’s the reality right now for Matthew Doc Perry, a Marine Corps veteran who was forced by the Providence VA Medical Center in Rhode Island to wait 19 days before he would be seen for an emergency dental procedure. He ultimately ended up with a 10-millimeter hole in the side of his face. 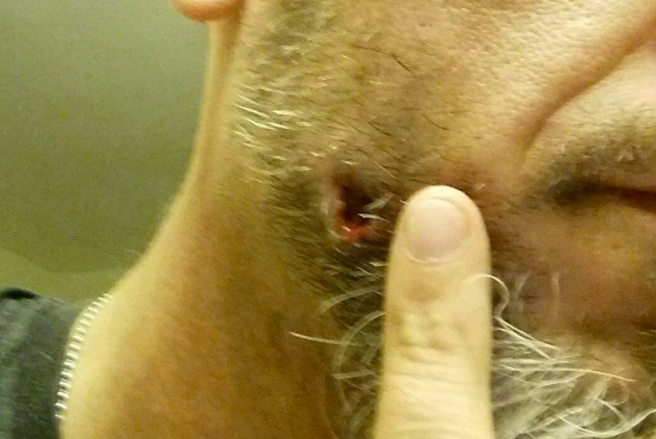 After being forced to wait 19 days for dental treatment, a veteran was left with a hole in his face. (Matthew Doc Perry/Facebook)

While Doc, 42, now has a permanent scar from the incident, what the Marine Corps Special Operations veteran wants to make right is the gross neglect and widespread lack of care for his brother and sister veterans at VA medical centers across the country, he told American Military News on Thursday.

Not only does Doc’s story reveal yet another example of the mistreatment veterans receive at the VA, but it also exposes the malpractice and complacency of the system.

On Feb. 10, 2016, Doc called the Providence VA seeking to make an appointment for a dental abscess, or pocket of fluids, he noticed growing inside his mouth. Being a medic, Doc knew the abscess was growing beyond his means. He didn’t go to the emergency room because he didn’t have a fever, Doc explained to American Military News.

He was in a lot of pain when he called the VA’s dental clinic and described his conditions, noting the urgency of his situation. The clerk said the earliest Doc could be seen would be Feb. 29, which was 19 days later.

Doc explained his pain levels, pointing out that he wasn’t even eating solid foods, mostly soup and Jell-O, so as not to aggravate the abscess.

He was put off still, and the clerk reiterated that the earliest possible appointment was 19 days from then.

After that, Doc called intermittently to see if any appointments became available sooner, making it a point to mention how the abscess was growing out of control.

When he finally went in on Monday, Feb. 29, 2016, the resident who treated him immediately said Doc should have been seen sooner. That resident wrote on Doc’s paperwork: “Patient should have been scheduled as emergency,” and that “no vital signs obtained.”

At that point, the abscess had moved into Doc’s cheek; it was lanced, or cut and drained, at the time, and Doc was told to follow up in a week, on Monday, March 7, 2016.

“That Wednesday evening, I literally felt the abscess shift from inside my mouth to outside my cheek,” Doc recalled. He called the VA dental clinic on Thursday, March 3, and again on Friday, March 4, 2016; that call was to inform them he was coming in. There would be no more putting him off.

“They pulled my tooth, and then they walked me across the street to the emergency room waiting room and had me check in with the nurse to be treated for my cheek,” Doc said.

Fast-forward a few months later, after mostly healing from the incident, and Doc met with the head of dental services, as well as the VA Director, Susan MacKenzie, for the Providence VA Medical Center in order to discuss what had taken place. 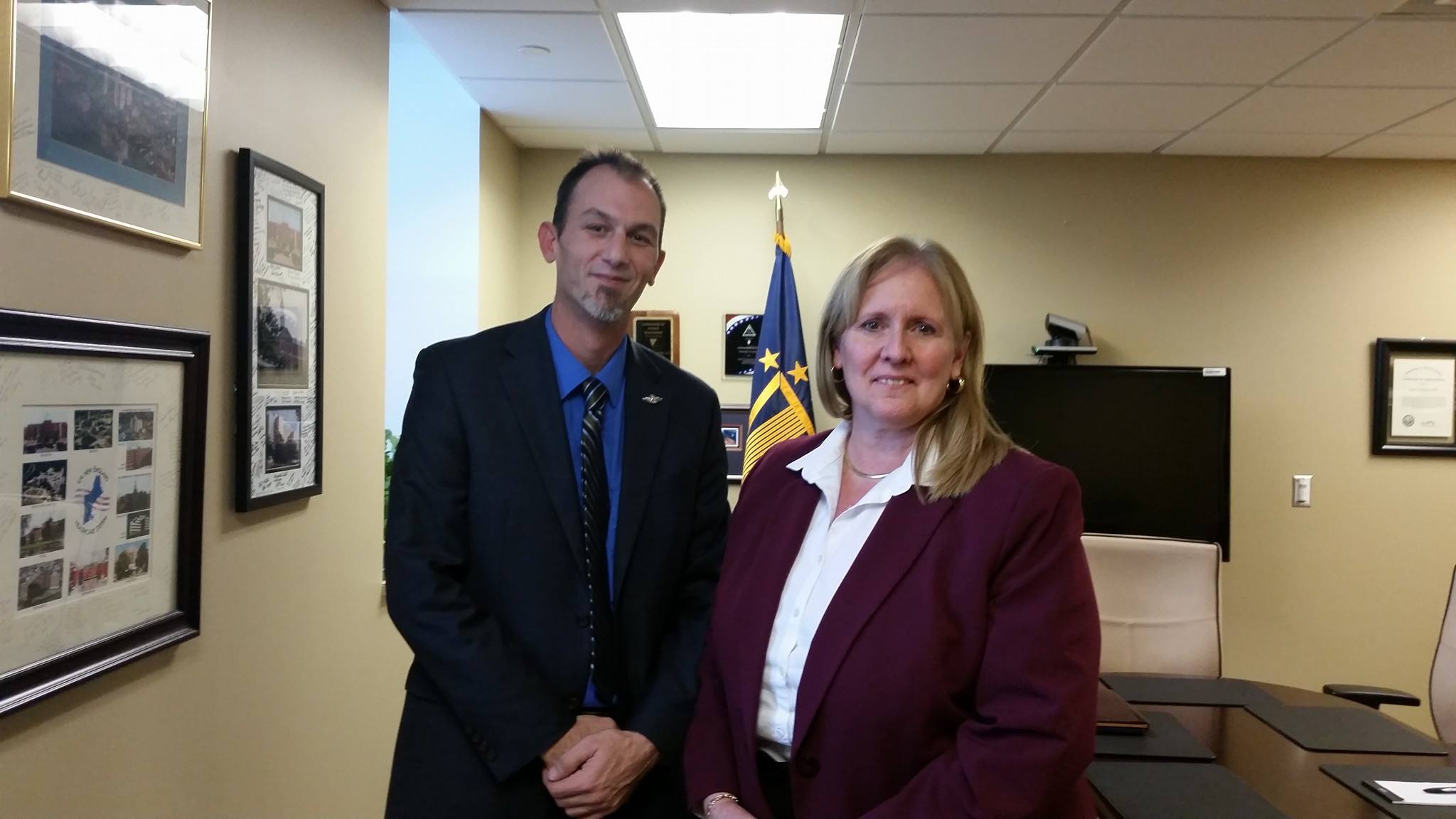 Doc met with the head of dental services, as well as the VA Director, Susan MacKenzie (pictured), for the Providence VA Medical Center. (Matthew Doc Perry/Facebook)

But when he met with the head of dental services, he was told that the VA actually has two emergency service appointments set aside every week for a situation just like his. The clerk who took his phone calls back in February had failed to mention this.

“That part of the process never happened,” Doc said.

Not only that, but Doc also found out that any diabetic from the VA’s metabolic clinic is entitled to free dental cleanings. Doc is a diabetic, yet he had no idea about the benefit.

Neither did anyone in the metabolic clinic.

“No one in metabolic clinic had any idea that they could send patients to the dental clinic for free cleanings,” Doc said. “That’s another way this probably could have been avoided – I’m a diabetic. If I had known I could get free cleanings, I probably wouldn’t have had any periodontal [gum] issues.”

When he met the VA director, Doc felt that his situation might be redressed, and that he was on the way toward making sure this never happened to another veteran.

But the Providence VA Medical Center did nothing. He didn’t receive any phone calls or letters, and his calls would go unanswered.

Doc would also learn two things about the Providence VA Medical Center that would only add to the already poor situation.

Apparently the Providence VA’s director of dental services receives a yearly bonus if the department comes in under budget, Doc said he learned. While he understands the incentive – being that dental work is considered cosmetic and generally expensive – what stood out was how no one in the diabetic clinic at the Providence VA knew they could get free dental cleanings, Doc pointed out.

“What do you think happens to his budget if his patient load doubles or triples,” Doc speculated. “He’s probably not going to come in under budget.”

Not only that, but remember the clerk who never told Doc about the emergency appointment slots, and who continually told him there were no earlier available appointments?

“That clerk is now retired,” Doc said, which apparently happened around the same time he started to meet with top officials at the Providence VA. While it might not be connected in any way to his case, it stood out to him, Doc said.

The Providence VA Public Affairs Office responded the following day to an inquiry. A spokesman told American Military News that they were aware of this veteran’s case and had contacted the veteran.

In November 2016, Doc filed a VA 1151 form. It’s an internal form that states something went drastically wrong and that it was the VA’s fault. The VA then has a 12-month period to respond, which would have been November 2017.

Several months after filing the 1151 form, Doc still had heard nothing. That’s when he had his attorney file as Tort Claim Form 95 with the federal government. This is a U.S. Department of Justice form that must be filed if a party wants to redress any grievances against a federal agency before suing them.

Doc filed that form in June 2017, and the VA had until Dec. 26, 2017, to address his case. The Providence VA spokesman acknowledged the Tort Claim to American Military News and said the VA could not speak about the case.

Come December of this past year, and Doc has heard nothing from the VA. His attorney has called the attorney handling the case for the VA “no less than eight times,” and not one phone call has been returned, Doc said.

After more than a year of trying to make the situation right with the Providence VA in Rhode Island, Doc continues to make it his mission to ensure this never happens to another veteran – now more so than ever, given the VA’s silence.

Doc posted photos to Facebook on Jan. 9 of this year detailing his experience at the Providence VA Medical Center.

“This is the result of having to wait 19 days to be treated for a dental abscess at the Providence [Rhode Island] VA Hospital,” Perry wrote. “The abscess decided to exit out of the side of my face… as you can see.”

While it can be painful, Doc shares his story not for himself, but for his brother and sister veterans, he explained, because this should never happen to another veteran.

“The one thing I keep saying is, ‘You know what, Doc? It’s a lot bigger than you. You need to stay the course,'” he said.