Ex-CIA officer arrested: Gave China US informants who were killed or tortured

A former CIA officer was arrested Monday night on charges of unlawful retention of national defense information, the Department of Justice said Tuesday.

And, Jerry Chun Shing Lee, 53, was suspected of helping China dismantle a U.S. spy network in China and then identifying informants, The New York Times reported. 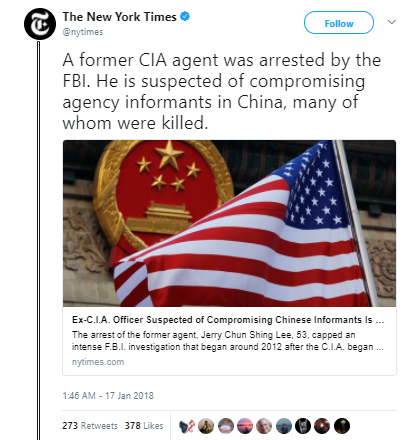 Lee, a naturalized U.S. citizen who lives in Hong Kong, was arrested upon his arrival at John F. Kennedy International Airport Monday night.

In August 2012, while Lee was staying with his family at hotels in Virginia and Hawaii, FBI agents conducted court-authorized searches of Lee’s room and luggage and found two small books containing handwritten notes with classified information in them. The classified information included the names and phone numbers of assets and covert CIA employees, operational notes from asset meetings, operational meeting locations and locations of covert facilities, the Department of Justice said.

Lee was then questioned by the FBI in 2013, but was not arrested.

Lee is charged with unlawful retention of national defense information and faces a maximum penalty of 10 years in prison, if convicted.

Lee’s arrival at John F. Kennedy International Airport was his first time back in the country since moving to China from Virginia in 2013.

Last year, the New York Times reported that more than a dozen CIA informants in China were killed or imprisoned over the course of two years. The Chinese government also started crippling intelligence gathering starting in 2010.

Navy finds 46 captured flags that were hidden for 104 years