CIA Director Mike Pompeo said North Korea is building its nuclear program for “coercive purposes” and not for self defense, but that the next step for them to take is to have the capability of firing an arsenal of ballistic missiles at the U.S., according to Reuters.

The CIA is focusing on creating a variety of options in dealing with a North Korean threat while President Donald Trump focuses on the diplomatic side with North Korea, Pompeo said at the American Enterprise Institute in Washington.

“The President is intent on delivering a solution through diplomatic means … We are equally, at the same time, ensuring that if we conclude that is not possible, that we present the President with a range of options that can achieve his stated intention,” Pompeo said.

“I’ll leave to others to address the capacity or the wisdom of pre-emptive strikes,” he added. “From an intelligence perspective, we’re trying to ensure that all the various options that the President might want to consider are fully informed, that we understand what’s really going on and the risks associated with each of those decisions as best we can identify them for him.”

Speaking to his previous statement that North Korea is only “a handful of months away” from attacking the U.S. with a ballistic missile, Pompeo said: “I want everybody to understand that we are working diligently to make sure that a year from now I can still tell you they are several months away from having that capacity.” 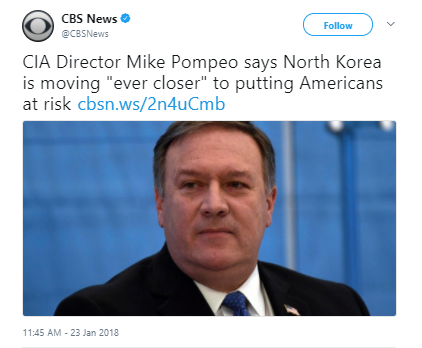 Kim Jong Un “will not rest with a single successful test,” Pompeo said. “The logical next step is to develop an arsenal” of missiles that can strike the U.S. simultaneously.

“Our mission is to make the day that he can do that as far off as possible,” he added.

Pompeo’s comments come amid talks between North and South Korea over next month’s Winter Olympics in South Korea, where the two countries will walk together at the opening ceremony.