CIA Director: Russia expected to interfere in US midterm elections

“I have every expectation that they will continue to try and do that,” Pompeo told the BBC. “But I’m confident that America will be able to have a free and fair election, (and) that we will push back in a way that is sufficiently robust that the impact they have on our election won’t be great.” 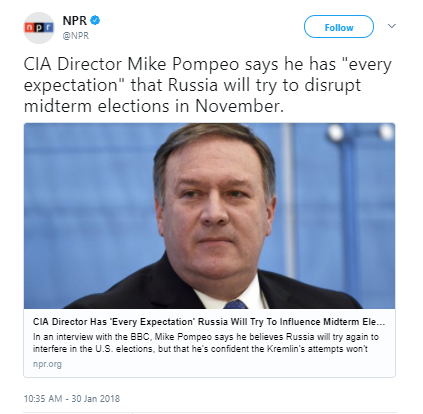 Pompeo said he agrees with the intelligence community that Russia interfered in the 2016 Presidential campaign and other elections in Europe.

Pompeo said he is concerned by Russia’s subversion tactics, just as European countries are.

“I haven’t seen a significant decrease in their activity,” he said, adding that the U.S. is actively engaged in countering Russian subversion.

The intelligence community has been actively trying to suppress and deter Russia.

“We are going to go out there and do our damnedest to steal secrets on behalf of the American people. And I wanted to get back on our front foot,” Pompeo said about the CIA.

Pompeo said the CIA is committed to spreading the truth about Russian meddling.

“I don’t do fine lines. I do the truth,” he said. “We deliver nearly every day personally to the President the most exquisite truth that we know from the CIA.”