In the lead-up to Marvel’s “Avengers: Infinity War,” Captain America has been fighting ISIS.

While ISIS is not directly named in the comic, “Avengers: Infinity War Prelude,” an ISIS flag can be seen on one of the terrorist vans. 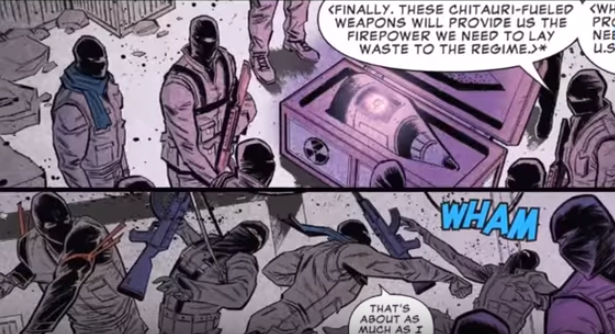 Captain America and his team, including Falcon and Black Widow, work to put a stop to the terrorist organization that has gotten its hands on “Chitauri-fueled weapons.”

The Chitauri are a race of extraterrestrial shapeshifters with futuristic weapons that appeared in Marvel’s “The Avengers” and wreaked havoc on New York City.

In the comic book, Captain America and his team head to Syria and then to Lebanon to take on another alien weapons exchange facility, all while operating outside the jurisdiction of the U.S. government or the American military after having gone underground following “Captain America: Civil War.”

Check it out here:

Veteran of war in Afghanistan loses appeal, could be deported soon, attorney says