President Donald Trump speaks to the press while walking to Marine One on the South Lawn of the White House Dec. 15, 2017 in Washington, D.C. (Olivier Douliery/Abaca Press/TNS)
January 12, 2018 Melissa Leon
Share
Tweet
Flip

Aides said the President will waive sanctions for the final time, Reuters reported, pointing out that if the deal is not strengthened with a follow-up agreement in 120 days, the U.S. “will unilaterally withdraw from the international pact.”

The sanctions were lifted per the landmark 2015 nuclear agreement, which Trump has called “one of the worst” and “the most one-sided transaction the United States has ever entered into.”

The U.S. will also impose non-nuclear sanctions aimed at Iran’s ballistic missile activity, as well as its behavior toward protestors in recent weeks, The Hill reported. 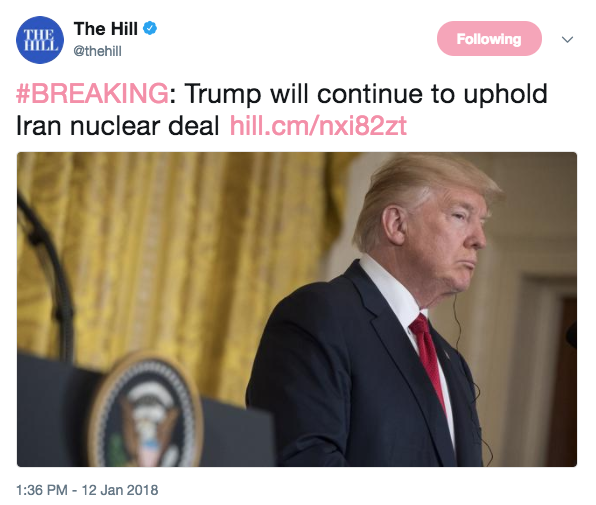 “In a background briefing with reporters, senior administration officials also warned that this will be [the] last such waiver, calling on a follow-up deal with Europeans and a legislative fix from Congress,” The Hill reported.

Trump in October of last year said the U.S. would not certify the Iran nuclear deal, and pushed it to Congress to fix the deal’s “serious flaws” in order to protect the American people. At that time, Trump had said the deal would be “terminated” if an agreement wasn’t reached.

The Iranian nuclear deal was drawn up in 2015 under former President Barack Obama, with Iran, the U.S. and five other nations. Its framework includes stipulations that Iran would redesign, convert and reduce its number of nuclear facilities in order to lift nuclear-related economical sanctions, which would reportedly free up billions of dollars in oil revenue and frozen assets for Iran. The U.S. and Iran also agreed to their own terms, along with terms penned with other nations.

However, Iran has not held up its end of the deal, Trump has repeatedly said.

His number one goal is always to protect the American people, Trump has explained, which is why he ordered a review of the Iranian landmark policy that was forged in 2015 under his predecessor.

Trump has said the “rogue regime” of Iran is only perpetuating terrorism around the world, and is becoming more aggressive in doing so.

“The Iranian dictatorship […] remains the world’s leading state sponsor of terrorism,” the President has said, saying the regime provides assistance to al-Qaida, the Taliban, Hezbollah, Hamas and other terrorists.

As for the 2015 deal, Trump has said: “We got weak inspections in exchange for no more than a purely short-term, temporary delay for Iran on its path toward nuclear weapons.”

Additionally, along with pushing the deal back to Congress, the President authorized the U.S. Treasury to impose sanctions on Iran’s Revolutionary Guard Corps (IRGC), which he called a “corrupt personal terror force.”

The IRGC is Iran’s strongest military force that was founded after the Iranian revolution in 1979. While Iran’s regular military, the Iranian Army or the Artesh, exists to defend the nation’s borders from outside enemies, the IRGC exists specifically to counter domestic affairs in order to protect the country’s radical Islamic system. They are the defense against military coups or “deviant movements” against the government.

Trump says they are supporting terrorism.

During his speech this past fall at the United Nations General Assembly, Trump accused Iran of funding terrorists and creating a dangerous missile arsenal. The Iranian President later came out and said flatly that Iran wants to strengthen its missile capabilities – and doesn’t intend to ask permission to do it.