North, South Korea will march together under unified flag at Winter Olympics

North and South Korea have decided to march together, unified under one flag, during the Opening Ceremony of the upcoming Winter Olympics in South Korea this February.

The South Korean Unification Ministry announced the decision in a statement Wednesday, adding that the two Koreas will also form a unified women’s hockey team. 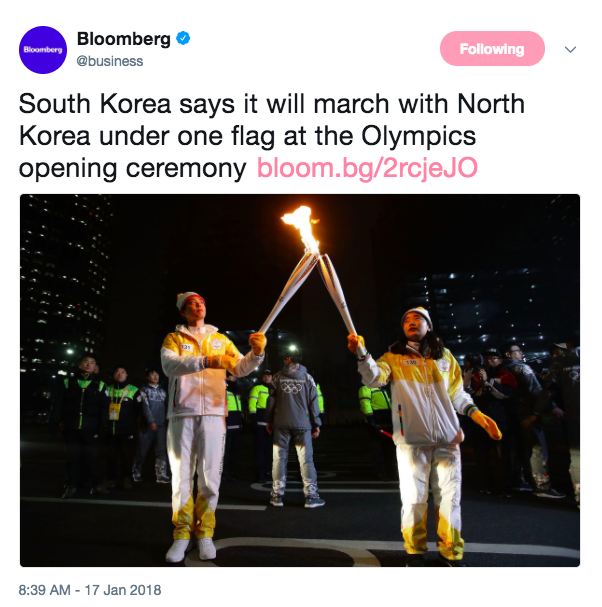 North and South Korea will march together under one unified flag at the Winter Olympics. (Twitter)

This announcement comes after delegates from the two countries met for the third time in about a week.

North Korea recently announced it would send athletes to the Winter Olympics in South Korea. It will also be sending a 230-person cheering squad.

On Jan. 3, North Korea reopened a once dormant telephone hotline that links directly to South Korea, and the two countries spoke for 20 minutes, this in advance of the historic North-South Korean meeting that took place – it was the first time negotiators met in two years.

Both North Korea and South Korea planned to re-open a second military hotline on the Korean peninsula. The red and green phone system is one of 33 direct lines that the two countries once used to communicate. The particular hotline that was reopened is located in the “truce village” of Panmunjom in the Korean Demilitarized Zone (DMZ) that separates the two Koreas.

On Jan. 4, following the opening of the hotline, President Donald Trump and South Korean President Moon Jae-in agreed to delay scheduled joint military exercises during the Winter Olympics next month.

North Korea’s delegation to the Olympics in South Korea will include athletes, a cheering squad, a performance-art troupe, observers, a taekwondo demonstration team and journalists, according to a statement from South Korean Vice Unification Minister Chun Hae-sung.