One of the U.S. Navy’s newest commissioned warships, the littoral combat ship USS Little Rock, will be staying in Montreal due to icy and wintry conditions, USNI News reported.

“Significant weather conditions prevented the ship from departing Montreal earlier this month and icy conditions continue to intensify,” a Navy spokesperson said. “The temperatures in Montreal and throughout the transit area have been colder than normal, and included near-record low temperatures, which created significant and historical conditions in the late December, early January timeframe.” 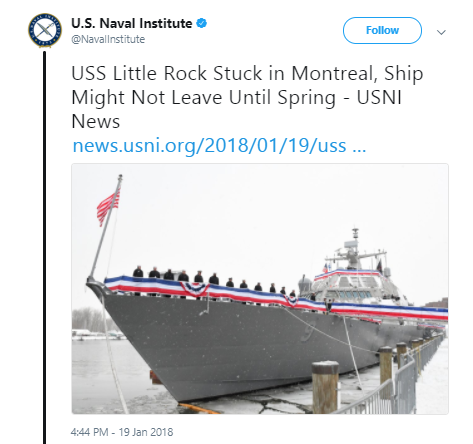 After being commissioned in Buffalo on Dec. 16, the USS Little Rock was scheduled to make its way to Mayport Naval Station in Florida. After being delayed several days at Lake Erie, the ship finally left and reached Montreal by Dec. 27.

However, due to icy conditions from a blast of Arctic air, the vessel has been kept in Montreal since then to ensure the safety of the crew. They will be kept there until they can safely transit the St. Lawrence Seaway.

“While in port, the crew of Little Rock will continue to focus on training, readiness and certifications,” a Navy spokesperson told USNI News.

The USS Little Rock is the fifth Freedom-class littoral combat ship to join the fleet, and it cost $440 million.