Boeing unveiled a design for its potential successor to the SR-71 Blackbird, and it’s capable of flying at five times the speed of sound, according to Aviation Week.

Boeing unveiled the hypersonic aircraft concept at the American Institute of Aeronautics and Astronautics SciTech forum in Orlando last week, according to Aviation Week. 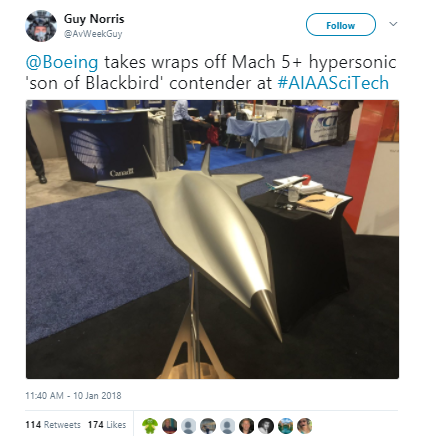 The aircraft is designed for spy recon assignments, similar to the Blackbird SR-71 – the fastest manned airplane ever made.

The U.S. has tested a Mach 20 unmanned aircraft in the past. That 2011 hypersonic flight test ultimately crashed into the Pacific Ocean after a few minutes.

Boeing’s head of hypersonic research told Aviation Week there is a two-step development process for the aircraft that has yet to be approved for development.

First, there would be flight tests with an F-16, single-engine design, followed by a twin-engine, full-scale operational vehicle that would be roughly 107 feet long, similar to the SR-71.

The new aircraft would compete with Lockheed Martin’s S-72, which may be in its final stage of development and would be ready for testing in the 2020s.

The challenge that the SR-71 replacement faces would be its ability to take off, accelerate and reach Mach 5, and then slow down by itself.

Boeing is considering using a conventional turbojet to hit Mach 3, but then use another configuration to achieve Mach 5 and beyond.