Army Ranger veteran appointed as interim US attorney for Hawaii 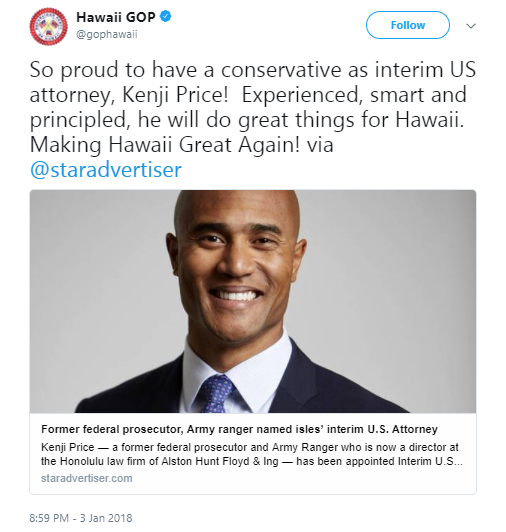 “Kenji Price is a former Army Ranger with two Bronze stars, and a former federal prosecutor who worked organized crime, public corruption, and international drug trafficking cases – including against the Sinaloa Cartel,” Sessions said.  “He will bring this outstanding background to the job of Interim U.S. Attorney for Hawaii. I am confident he will excel in this role as he has in every other.”

Price, who grew up in Hawaii, currently serves as a director at Alston Hunt Floyd & Ing, “where his practice focuses on white collar criminal defense and commercial litigation,” the Justice Department said.

“Mr. Price previously served as an Assistant United States Attorney in the Eastern District of New York, where he prosecuted a variety of cases involving domestic and international narcotics trafficking and other federal offenses,” the Department said.

Price served as an officer in the U.S. Army for approximately four years, during which time he served as a member of the 75th Ranger Regiment and the 173rd Airborne Brigade.

Price is one of 17 temporary U.S. attorneys announced Wednesday who are permitted to serve in the position for 300 days.

Alex Trebek on medical leave from ‘Jeopardy!’ after surgery