The new test for the standards, called T-2 standards, will go into effect next year, to determine how well TACP airmen and air liaison officers (ALOs) can physically perform on the job.

These two occupations will “make them the first career fields in the Air Force to have occupationally-specific and operationally-relevant standards, as well as a second fitness assessment.”

“As we finalize this first wave, we’re going to take that feedback and engage other communities in the Air Force and find out if this kind of science would apply and benefit their communities,” Baumgartner said. 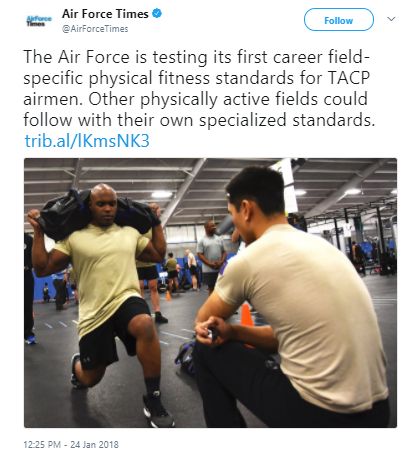 Baumgartner emphasized that standards must be tailored for each specific field based on the requirements needed for their job.

“What a TACP has to do on the battlefield is dramatically different than even what another battlefield airman has to do, let alone the rest of the Air Force,” he told Air Force Times.

Policy rules regarding the T-2 standards, including what happens to those who fail the test, will be finalized over the coming months, Air Force Times reported.

The Air Force expects the standards to go into effect in 2019 after having been working on them since 2011.

“ALO and TACP operators will be given a 12-month period after implementation to adapt to these new tests and standards before they are officially enforced,” Baumgartner said in a news release.

All airmen are currently required to meet Tier 1 physical fitness standards by completing a test for push-ups, sit-ups and a 1.5-mile run.

“The Tier 1 PT test is a health-based test,” Maj. Justin Bañez, the Air Force’s career field manager for air liaison officers, told Air Force Times. “It makes sure you are healthy and determines your risk for cardiovascular disease, but it’s not necessarily a good predictor of your ability to do your job. The Tier 2 test focuses on what your career field requirements are — what are your critical physical tasks. For a TACP, that could range anywhere from having to pull my buddy who gets shot, to be able to climb over obstacles, or into a helicopter, those types of things. This test is supposed to be predictive of your ability to do those types of tasks.”

According to the news release, excluding push-ups and sit-ups, the TACP and ALO test includes:

Their test will exempt battlefield Airmen from three of the four components except for the abdominal circumference test. The test requires TACPs and ALOs to achieve 46 points out of 100 without scoring any 1s in any event.

Baumgartner said the scoring system is a prototype right now and will be adjusted based on data collected.

“Not being able to do any one thing would be indicative of a risk to your ability to do your job. A guy can be really good at lifting heavy weights, but if I need him to ruck to the objective, three or four miles, and he can’t do it, then he’s not really effective. You need a good balance across the board,” Banez told Air Force Times.

The Air Force studied airmen completing tasks in real-world scenarios to determine the requirements for their specific jobs, and what physical exercise results they would need to meet those requirements.