NFL Commissioner Roger Goodell announced Thursday that 15 Medal of Honor recipients would be saluted during next month’s Super Bowl and participate in the coin toss. 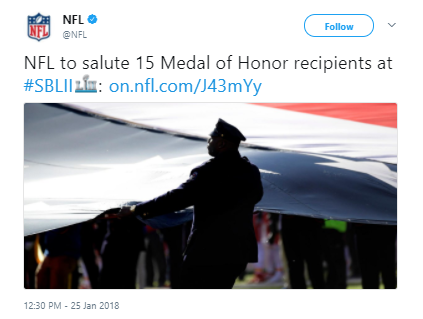 World War II veteran Hershel Woodrow “Woody” Williams, who was awarded the Medal of Honor for his actions during the Battle of Iwo Jima, will toss the coin at Super Bowl LII while the other Medal of Honor Recipients stand beside him.

“The NFL is proud to honor our Nation’s heroes at Super Bowl LII,” Goodell said. “These courageous individuals deserve to be recognized on America’s biggest stage. We are grateful for their service to our country and we are pleased to continue the NFL’s longstanding tradition of hosting special tributes to service members at the Super Bowl.”

The other 14 Medal of Honor recipients who will be saluted at the game include:

The NFL is also hosting a number of festivities in support of the military leading up to the Super Bowl, which takes place on Feb. 4 between the New England Patriots and the Philadelphia Eagles.

The NFL will host a Military Appreciation Day at the Super Bowl Experience Driven by Genesis on Tuesday, Jan. 30, from 3 to 8 p.m.

The NFL and USAA will also recognize the winner of the 2017 Salute to Service Award presented by USAA at NFL Honors on Feb. 3.