One-third of the A-10 Warthog fleet will be grounded for good if the Air Force is unable to provide funds for new wings, according to a top civilian in charge of the program.

Todd Mathes, the civilian A-10 Program Element Manager for the Air Force’s Air Combat Command, said at a recent A-10 Program Management Review meeting that the re-winging effort “was not going to happen,” according to officials in the room, the Project on Government Oversight reported. The officials spoke on the condition of anonymity, fearing retaliation after it was previously reported that now-retired Air Force Maj. Gen. James Post said those who offer support for the A-10 and write letters to Congress are committing acts equivalent to treason. 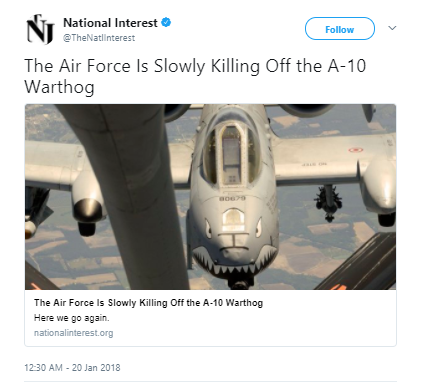 In 2007, Boeing received a $2 billion contract as part of an upgrade program that would keep the aircraft flying through 2030, but stopped the program early and only upgraded roughly 170 aircraft because the Air Force did not extend the contract.

Secretary of the Air Force Heather Wilson said last month she likes the A-10, and would like to fund the A-10 re-winging effort if funds were included in the budget.

“If that [funding] comes through, we will work on executing that so we can get that line back up so that we can re-wing,” Wilson said to the Senate Armed Services Committee. “I think the amount would be the tooling and the first four or five sets of wings for the A-10.”

While Mathes’ comments offer a contradiction to Wilson’s statements, an Air Force Media Relations official clarified that there are no plans for the re-winging program outside the Fiscal Year 2018 defense budget.

“Pending approval of the FY18 appropriation, the Air Force plans to use the $103 million authorized in the FY18 NDAA [National Defense Authorization Act] to award a contract, establish a new wing production line and produce four additional A-10 wings. Establishing the production line will enable the Air Force to procure additional wings if the decision is made to do so in future budgets,” the official told the Project on Government Oversight.

The Air Force does not have a budget for the re-winging effort for Fiscal Year 2018. They placed the project in the “unfunded project” category so that Congress would have to find the funds for the project.

For the last 30 years, the Air Force has tried to retire the A-10 Warthog, but its popularity among ground troops and Congress have prevented it.