Woman scammed out of $350,000 by imposter ‘US Army general’ who romanced her from Syria

The FBI is investigating a catfishing scam involving a 70-year-old Oklahoma woman who sent more than $225,000 – and possibly up to $350,000 – to a person posing as a U.S. Army general stationed in Syria.

Phyllis Lindsey, 70, said she fell victim to the scam by accepting a friend request on Facebook from a “Gen. Lester Holmes,” News 9 reported. 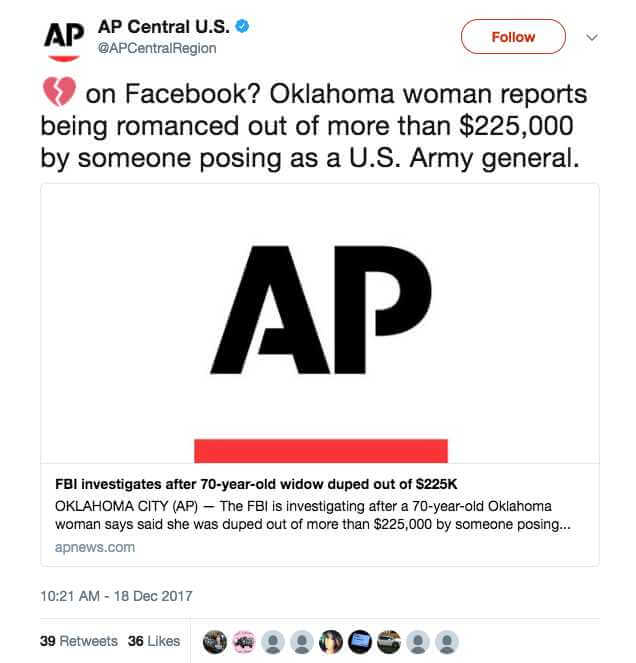 Lindsey, who has been a widow for the past two years, said she stayed in contact with the person because she felt lonely.

“He was telling me anything to get me to like him” Lindsey told News 9.

At one point Holmes told her that he was stuck in Syria without his discharge papers. He asked her if she could pay to have his belongings, including the papers, sent to her in the U.S.

Lindsey told News 9 that Holmes said he didn’t want the Pentagon to know he lost his exit papers.

Holmes told Lindsey to lie about why she needed to transfer such large sums of money to him.

“Darling remember in case you are asked at the bank for purpose of the transfer tell them you are buying a car,” Holmes wrote in a text message to Lindsey.

In October, Lindsey made four wire transfers to Holmes.

When Lindsey’s son found out about the fourth transfer of $100,000 to Holmes, he contacted the FBI knowing that she was being scammed.

“It’s embarrassing. It’s upsetting, but if I hide and don’t ever talk about it, someone else could be caught in the same thing,” Lindsey told News 9.

Lindsey was told she would be paid back with interest and there would be $2.8 million inside the luggage she would receive.

“It was quite a hit,” she said. “That was my retirement. And what really irritates me is he knew it. I said, ‘You’re draining me dry.'”