A 27-year-old woman from Long Island, New York, has been accused of sending Bitcoin and other cryptocurrencies in order to support ISIS, according to the U.S. Department of Justice.

In an unsealed five-count indictment last week, Zoobia Shahnaz, was charged with bank fraud, conspiracy to commit money laundering and three substantive counts of money laundering, which could land her in prison for up to 90 years. She was arrested last Wednesday. 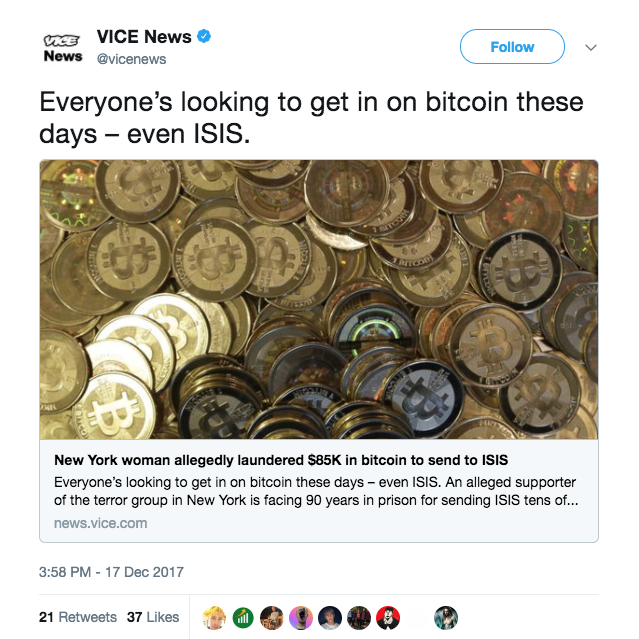 “The defendant defrauded numerous financial institutions and obtained over $85,000 in illicit proceeds, which she converted to Bitcoin and other cryptocurrencies,” the Department of Justice said. “She then laundered and transferred the funds out of the country to support the Islamic State of Iraq and al-Sham (“ISIS”), which has been designated by the U.S. Secretary of State as a foreign terrorist organization.”

Shahnaz fraudulently took out more than a dozen credit cards and used them to purchase approximately $62,000 in Bitcoin and other cryptocurrencies online.

“She then engaged in a pattern of financial activity, culminating in several wire transactions, totaling over $150,000, to individuals and apparent shell entities in Pakistan, China and Turkey,” according to the Justice Department. “These transactions were designed to avoid transaction reporting requirements, conceal the identity, source and destination of the illicitly obtained monies, and, ultimately, benefit ISIS.”

Shahnaz attempted to leave the United States and travel to Syria on July 31 by taking a flight from John F. Kennedy International Airport to Islamabad, Pakistan, with a multi-day layover in Istanbul, Turkey, which is often used as an entry point to Syria to join ISIS. She was stopped at the airport by law enforcement.

According to ABC News, Shahnaz searched for “one-way tickets to Istanbul” on the internet, but instead purchased a round-trip ticket to throw law enforcement off about her intentions to stay in Syria.