The U.S. is planning a “bloody nose” military attack on North Korea, and new military solutions for the Korean Peninsula are in the works, the U.K.-based Telegraph exclusively reported on Wednesday. 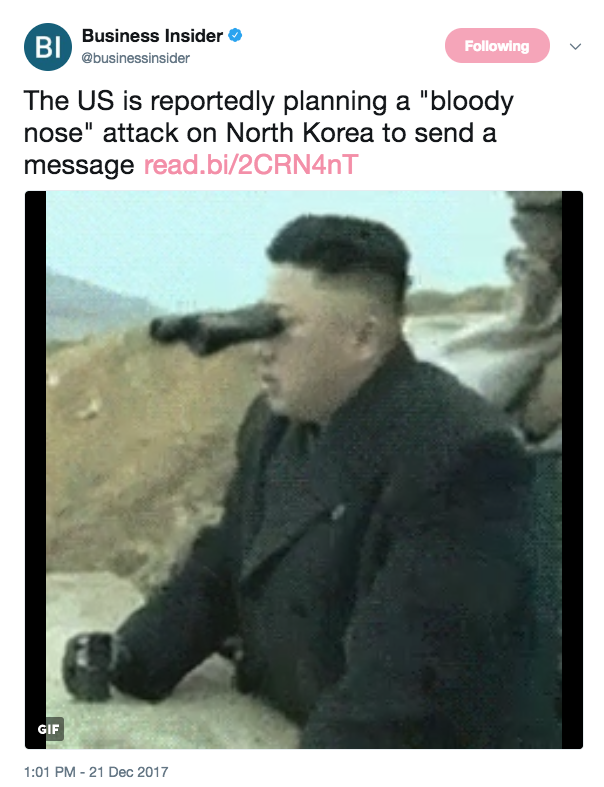 Sources told the Telegraph that one option could be destroying a missile launch site before it can be used, or destroying stockpiles of weapons, it reported.

“The Pentagon is trying to find options that would allow them to punch the North Koreans in the nose, get their attention and show that we’re serious,” a former U.S. security official told The Telegraph.

The Telegraph cited “well-placed sources” – three of them, including “two former U.S. officials familiar with current thinking and a third figure in the [Trump] administration.”

Little progress has been made in the stand-off with North Korea that causes tensions to run high around the globe, as the country led by dictator Kim Jong Un continues to tout its missile program and threaten the Untied States with destruction. Diplomatic efforts to quell the threats and denuclearize North Korea have failed to move the needle on the situation’s urgency.

Kim Jong Un said earlier this month that his scientists would continue making “more latest weapons and equipment” in order to “bolster up the nuclear force in quality and quantity,” North Korea’s state-run news agency said.

The ICBM was launched from Sain Ni and traveled more than 600 miles before crashing into the Sea of Japan, within Japan’s Exclusive Economic Zone (EEZ). The ICBM was in flight for more than 50 minutes.

The missile launch defied international sanctions on the country led by dictator Kim Jong Un, and it drew ire across the globe, as this was the highest missile North Korea has ever launched – reaching nearly 2,800 miles into space.