The U.S. Army’s Special Warfare Center and School (SWCS) has launched an investigation into allegations that Army leadership are lowering training standards at the school, following a mass email from an anonymous Special Forces instructor that was made public, according to a report.

The email, written by a Special Forces instructor from Fort Bragg, was titled “Careerism, Cronyism, and Malfeasance in SWCS: The End of SF [Special Forces] Capability.”

It details lowering training standards and Army leadership careerism that allow unqualified soldiers to become Green Berets, which threatens the effectiveness of the force. The email – almost 6,300 words long – was first published by SOFREP. 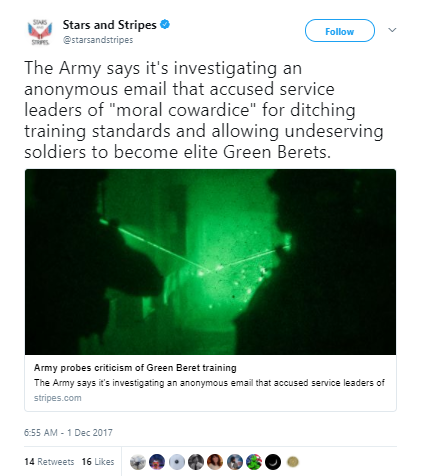 “SWCS has devolved into a cesspool of toxic, exploitive, biased and self-serving senior Officers who are bolstered by submissive, sycophantic, and just-as-culpable enlisted leaders,” the instructor wrote in the email. “They have doggedly succeeded in two things; furthering their careers, and ensuring that Special Forces more prolific, but dangerously less capable than ever before.”

The instructor added that the weakening standards have been set in motion by senior leadership such as, “MG Linder and COL Lock, and actualized by MG Sonntag, CSM Arrowsmith, COL Kornburger, and CSM Berkibile,” the email said.

SWCS Commander Maj. Gen. Kurt Sonntag defended the training standards and rejected a number of the instructor’s points noted in the email, but he said that some points need to be further evaluated through “formal inquiries and a number of existing institutional forums.”

Sonntag argued that no training standards have been adjusted or removed despite the growing want for more Special Forces soldiers since the Sept. 11 terror attacks.

“Let me be clear, I would be proud to serve with each and every one of our Special Forces Qualification Course graduates, and I stand behind the quality of every soldier we are sending to the operational force,” Sonntag wrote.

According to the Special Forces instructor who wrote the email, one of the underlying issues is that the “career-focused” leaders are removed from “team life” and do not care about having subpar soldiers in a “no-fail” environment.”

When one of the cadre brought up their concerns, the email said that CSM David Gibb’s response was: “‘We push some of these issues forward [to the Regiment] because we believe that the Groups can succeed in fixing those problem graduates when they arrive. That is an amount of risk we willingly accept, because after all it’s much easier to get a tab removed at Group if he doesn’t pan out, than to risk relieving what’s basically a fully qualified student who might have been able to fix himself and become a solid Green Beret.'”

Through the use of policy implementation and action, women attempting to become Special Forces will have their standards lowered, despite a majority of people who are in favor of having female Special Forces soldiers wanting them to meet the same standards of men, according to the instructor.

“The standards will have been lowered well beforehand,” the instructor said. “All accusations of preferential treatment or double standards will fall by the wayside when these ‘standards’ set forth have already been deemed the ‘status quo’ well before their arrival.”

“The cruelty of the situation is that any woman with the fortitude to attempt this training would most definitely have wanted the standards to remain the same,” the email read. “It is reasonable to assume they would have wanted to test their metal against the historical standards and ensured they were every bit as capable as the men they aspire to serve next to.”

Sonntag said the training standards are still among the most difficult in the U.S. military, arguing that in 2017, 541 soldiers have completed the Green Beret qualification course out of more than 2,000.