Two Marines, one soldier were the first police officers to take down NYC terror bomber

Four police officers with Port Authority of New York and Jersey – including one Army veteran and two Marine veterans – are being hailed as heroes for taking down the New York City bombing suspect before he was able to do any more damage after initially detonating a pipe bomb underground at the Port Authority Bus Terminal on Monday.

The officers were identified as Marine veteran Sean Gallagher; Marine Combat Tracking Dog Handler veteran Anthony Manfredini; Drew Preston, a soldier who served in Afghanistan and Iraq, and has served three combat tours; and John “Jack” Collins, a lawyer who has served as a police officer for about 20 years. 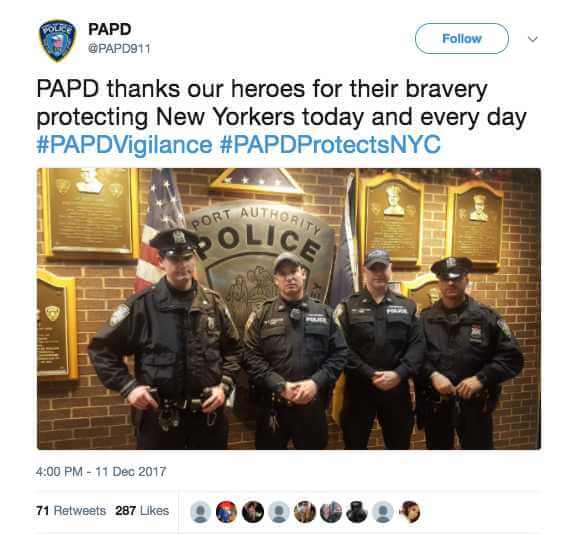 Manfredini was first at the scene when the pipe bomb detonated, after noticing people running from the passageway. Manfredini called out over the radio for others to join him as smoke filled the passageway.

Manfredini encountered the suspect, Akayed Ullah, on the floor with what he described as shrapnel wounds, said Bobby Egbert, spokesperson for the Port Authority Police Benevolent Association.

The officers noticed wires coming out of Ullah’s jacket and into his pants, according to Egbert. The officers quickly took action when Ullah began reaching for a cell phone, realizing that it could be used as a detonator. During the struggle, the officers managed to separate Ullah from the cell phone.

When Ullah was in custody, the police officers helped people safely evacuate from the area. 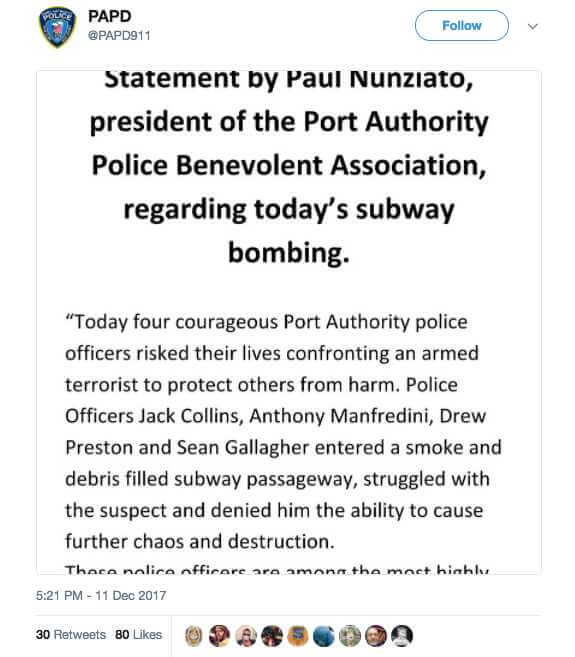 An explosion at Manhattan’s extremely busy transportation hub, the Port Authority Bus Terminal, was reported around 7:20 a.m. EST, the height of rush hour.

NYPD sources have said it was a pipe bomb explosion in an underground passageway that connects the 7th and 8th Avenue tracks, and that the suspect might have been on his way toward Times Square.