Tillerson, Lavrov: US and Russia will not accept North Korea as a nuclear power 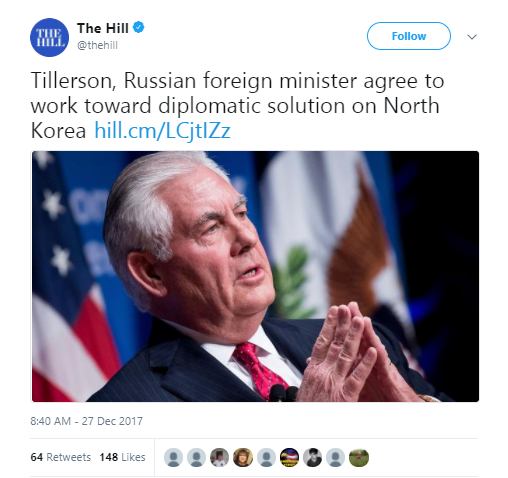 “The two discussed concerns related to the DPRK’s destabilizing nuclear program and emphasized that neither the United States nor Russia accepts the DPRK as a nuclear power,” State Department spokeswoman Heather Nauert said, referring to Russian Foreign Minister Sergey Lavrov and Secretary of State Rex Tillerson.

“Both sides agreed that they will continue to work toward a diplomatic solution to achieve a denuclearized Korean peninsula,” she added.

Lavrov stressed the need for “the fastest move to the negotiating process from the language of sanctions.” He said Russia would act as a mediator between the U.S. and North Korea.

Last week, the UN Security Council agreed upon new sanctions against North Korea that would limit its oil supply and slave labor market. The sanctions were in response to a November 29 missile test which North Korea claimed, could hit the U.S. mainland.

North Korea called the sanctions an “act of war.”

“We define this ‘sanctions resolution’ rigged up by the U.S. and its followers as a grave infringement upon the sovereignty of our Republic, as an act of war violating peace and stability in the Korean Peninsula and the region and categorically reject the ‘resolution,'” the statement said.

The life of a cop on Christmas