A Kentucky police officer that was assaulted on Christmas Eve while making an arrest was helped out by a U.S. Army medic that was nearby.

Staff Sgt. Stewart A. Lee, who was home on leave from Fort Sam Houston, provided first aid to officer Brian Powers, who had been injured trying to put handcuffs on 33-year-old Antonio Ford, who had a warrant out for his arrest for fourth degree assault. 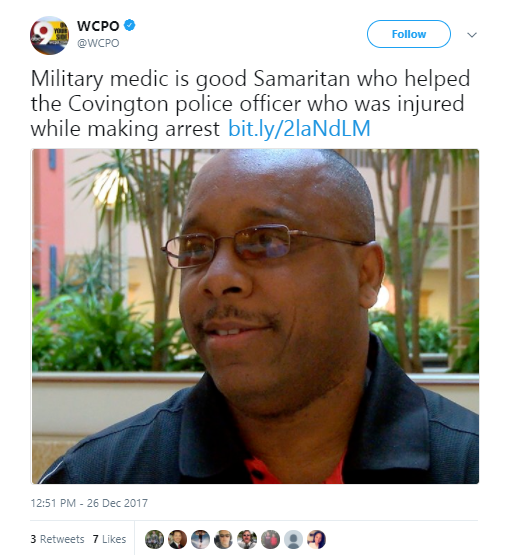 Ford tried to escape while the other officer chased after him.

“As I came around the back side of the car, I realized that he is not OK,” Lee told WCPO Cincinnati. “He had fallen and hit his head.”

“I automatically went into survival mode to make sure that he was OK,” Lee said.

Carrying his medical bag with him, Lee performed first aid until firefighters arrived and drove Powers to University of Cincinnati Medical Center.

“We owe him a great deal because, you know, at 1:30 in the morning to take the time to help an officer while he’s down — that’s great. That just shows the community coming together, working together,” Covington Police Chief Nader said.

Ford was caught and remains in the Kenton County Detention Center on $50,000 bond.

Black to give up top Budget slot, focus on governor’s race