Russia claims that US trained ex-ISIS fighters in Syria

General Valery Gerasimov, the chief of the Russian General Staff of the Armed Forces, told the daily Komsomolskaya Pravda newspaper on Wednesday that the U.S. trained former ISIS fighters in Syria that are now passing themselves off as the New Syrian Army or other names, Reuters reported. 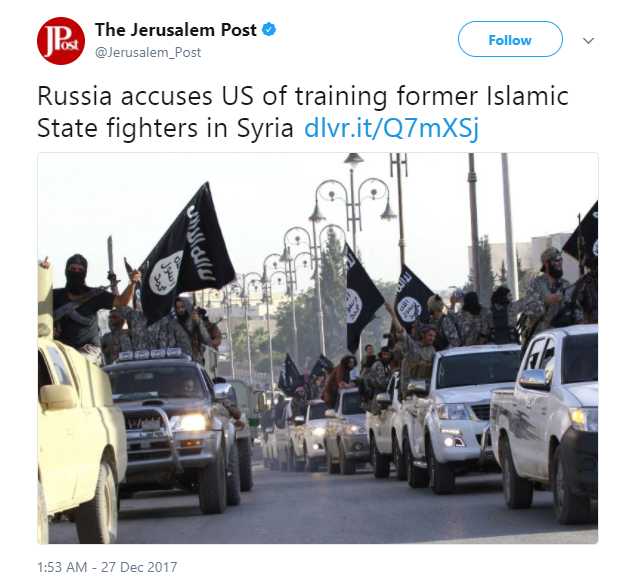 Geramisov said in an interview with the paper that Russian satellites and drones have caught ISIS militant brigades on a U.S. military base at Tanf, a Syrian highway border with Iraq.

The United States says the base is a temporary base used to train coalition partner forces to fight ISIS, Reuters reported.

“This base in Syria’s south is located within an area with a radius of 55 kilometers. It lies on the border of Syria, Jordan and Iraq. According to space intelligence and other sources, groups of militants stay there. De-facto, they train there,” Geramisov said, TASS Russian News Agency reported.

Geramisov said there are more ISIS groups that take up a different name at Al-Shaddadi camp, where another U.S. base is located.

“Their task is to destabilize the situation. We know that about 400 people from the Shaddadi camp left for the Al-Tanf region. When the main forces of the ISIL [the former name of the Islamic State group] were defeated, they attempted to destabilize the situation by launching an offensive from the eastern bank of the Euphrates River, but sustained serious losses,” Geramisov added.

Because ISIS lost the vast majority of their territory in Syria and Iraq, Russia has partially withdrawn from Syria, but has kept an air base and naval facility there to deal with potential instability in the region, Geramisov said.