North Korea is trying to put anthrax on its ICBMs

North Korea has started testing out how to put anthrax on its intercontinental ballistic missiles (ICBMs), and seeing if it will endure extreme heat and pressure upon re-entry into the Earth’s atmosphere, according to a recent report from Japan’s Asahi newspaper.

“North Korea has started experiments such as heat and pressure equipment to prevent anthrax from dying even at a high temperature of over 7,000 degrees generated at the time of ICBM’s re-entry into the atmosphere,” according to Asahi. “In part, there is unconfirmed information that it has already succeeded in such experiments.” 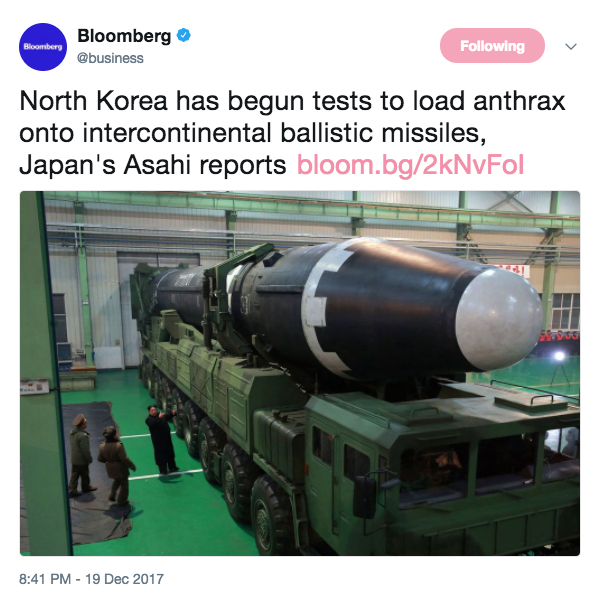 This comes after President Donald Trump on Monday acknowledged that North Korea must be completely denuclearized, when he revealed the country’s new national security strategy.

“We will work with allies and partners to achieve complete, verifiable and irreversible denuclearization of the Korean Peninsula, and preserve the non-proliferation regime in East Asia,” according to the strategy.

Trump publicly unveiled the new strategy on Monday. It puts America first, both domestically and internationally; invests in the country’s defense and breaks from the “damaging” sequester; and bolsters national patriotism and pride for the first time in a long time.

“We’re calling for a great reawakening. A rebirth of patriotism, prosperity and pride,” Trump said at the White House. “A returning to the wisdom of our founders.”

As the world is faced with rogue regimes and terrorist organizations, as well as many other challenges – including rival powers such as Russia and China that challenge America, the U.S. is also engaged in an “era of competition,” Trump said, acknowledging that “economic security is national security.”

The new National Security Strategy document has been in development for more than a year and has the endorsement of the entire cabinet, Trump said, pointing out that it is guided in “national interests” and “rooted in timeless values.”

The first pillar of the new strategy is to protect the American people.

“For the first time ever, the National Security Strategy includes a serious plan to defend our homeland,” Trump said. This includes the construction of a wall on the southern border, putting an end to chain migration, ending the “horrible” lottery programs, closing loopholes and supporting border agents, ICE (U.S. Immigration and Customs Enforcement) and U.S. Department of Homeland Security (DHS) personnel, the President said.

In protecting the American people, the new strategy also recognizes new domains that must be encountered, including cyber security and social media.

The second pillar of the strategy is to promote American prosperity, which includes “a complete rebuilding of American infrastructure and communications infrastructure,” Trump said.

The third pillar is to preserve peace through strength.

Importantly, the strategy “breaks from the damaging defense sequester,” Trump pointed out. “We’re gonna get rid of that.”

The strategy calls for the modernization of the military, and it reverses previous decisions to shrink the military – ultimately, it will “massively” build up the U.S. Military and, in doing so, subsequently create “millions of jobs,” Trump said.

It also recognizes warfare in the modern day – including space as a competitive domain, as well as the need for a multi-layered missile defense.

The fourth pillar of the strategy is to advance American influence in the world, and build out wealth and power at home, Trump said.

“America will lead again,” he said. “We don’t seek to impose our way of life on anyone, but we will champion our values without an apology.”