Nikki Haley unleashes her two most savage tweets yet

U.S. Ambassador Nikki Haley fired back at the United Nations after it passed a draft resolution that said any decisions regarding Jerusalem should be cancelled.

While the resolution did not directly mention the United States, it was clear that the move targets President Donald Trump, who recently announced that the U.S. will now acknowledge Jerusalem as Israel’s capital and relocate the U.S. Embassy there from Tel Aviv.

“The United States will not be told by any country where we can put our embassy,” Haley tweeted Monday.

“Now today, buried in diplomatic jargon, some presumed to tell America where to put our embassy,” Haley said at the U.N. on Monday. “The United States has a sovereign right to determine where and whether we establish an embassy.”

“I suspect very few member states would welcome security council pronouncements about their sovereign decisions. And I think some should fear it,” she added.

And on Tuesday, Haley tweeted: “At the U.N. we’re always asked to do more and give more. So, when we make a decision, at the will of the American [people], [about] where to located OUR embassy, we don’t expect those we’ve helped to target us. On Thursday there’ll be a vote criticizing our choice. The U.S. will be taking names.” 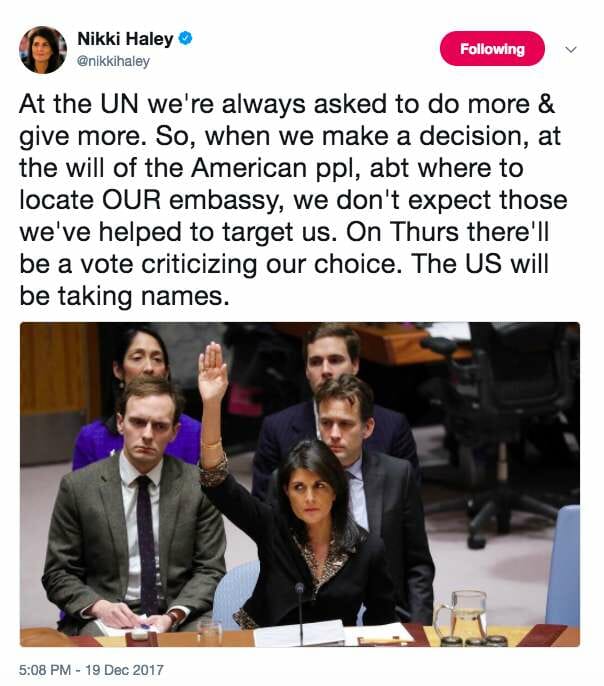 Trump earlier this month made the Jerusalem announcement, one that has been highly criticized by many but that Trump says is in the best interest of the U.S. and the pursuit of peace between Israel and Palestine.

There is an ongoing conflict between Israel and Palestine that dates back to the mid-20th Century, with origins in the Jewish migration, as well as the conflict between Jews and Arabs in Palestine. It is known as the world’s “most intractable conflict.”

While there is a long-term peace outlook, there has been no final peace agreement between Israelis and Palestinians. Key issues of the conflict include mutual recognition, borders, water rights, control of Jerusalem and other disputes.

“Israel is a sovereign nation with the right to determine its own capital; acknowledging this as a fact is a necessary condition for achieving peace,” Trump has said.

For more than two decades, Presidents have exercised a waiver to refuse to recognize Jerusalem as Israel’s capital and keep the U.S. Embassy there.

His decision, however, “marks the beginning of a new approach to the conflict between Israel and the Palestinians,” Trump said.

“After more than two decades of waivers, we’re no closer to a peace agreement between Israel and the Palestinians. It’s folly to assume repeating the same formula would improve the situation,” Trump has pointed out.

Jerusalem is home to Israel’s Parliament and Supreme Court, and the official residences of the Prime Minister and President, Trump has said. “It’s the heart of one of the most successful democracies in the world.”

And, Jerusalem is a place where “Jews, Muslims and Christians are free to live and worship according to their beliefs,” Trump has pointed out.

Recognizing Jerusalem as the capital and relocating the U.S. Embassy “doesn’t reflect a departure from our goal of a peace agreement,” Trump has said, pointing out that his administration will not “repeat the same failed strategies of the past.”