The U.S. Navy will grant “fitness pardons” to nearly 50,000 sailors who have fitness failures on their records, in order to help maintain the level of sailors needed for readiness, the Navy Times reported this week.

“Retention of every capable Sailor is critical to the operational readiness of the Navy,” said Vice Adm. Robert Burke, Chief of Naval Personnel, the Navy Times reported. “The goal of the Navy’s physical readiness program is to maintain a minimum prescribed level of fitness necessary for world-wide deployment and to maintain a sailor’s long-term health and wellness.”

The change is effective immediately. 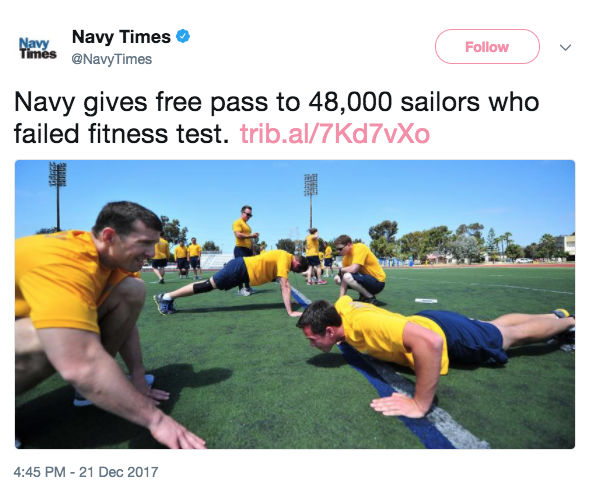 The Navy-wide message “instructs commands to immediately stop discharging sailors for fitness failures and to cancel any pending discharges for sailors slated to be kicked out after March 31,” the Navy Times reported, and that goes for both enlisted sailors and officers.

In the same message, the Navy announced new rules for the Physical Fitness Assessment (PFA).

One of the new rules is that sailors will no longer be forced to leave the Navy after two failed fitness tests in three years, the Navy Times reported.

“Other major changes will include making sailors take a body fat test immediately after reporting to a new command and also making sailors who fail the fitness test ineligible for advancement or frocking,” the report said.

The PFA includes a Body Composition Assessment and physical test that measures sailors on push-ups, sit-ups and a 1.5-mile run.