Former National Security Advisor to President Donald Trump and retired U.S. Army Lt. Gen. Michael Flynn has been charged with lying to the FBI where it concerned conversations with the Russian ambassador.

He pleaded guilty on Friday to one count of making false statements to the FBI about discussions he had with Russia’s ambassador the U.S. after President Trump’s election.

Special Counsel Robert Mueller, who is spearheading the now-infamous Russia investigation and allegations of Russian hacking of the 2016 Presidential Election, charged Flynn on Friday with “willfully and knowingly” providing “false, fictitious and fraudulent statements” to the FBI. 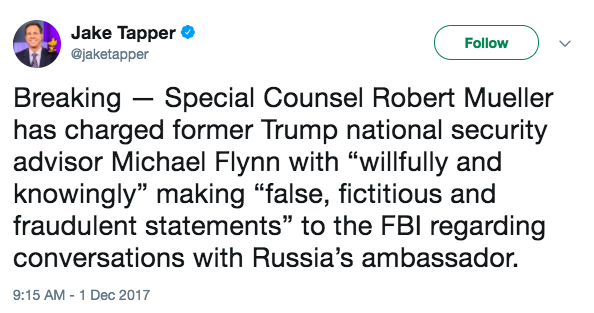 Specifically, Flynn is accused of falsely claiming that he had not asked Russia’s ambassador to the United States last Dec. 29 [2016] “to refrain from escalating the situation in response to sanctions that the United States had imposed against Russia that same day.”

Flynn also allegedly lied by telling the FBI “he did not recall the Russian Ambassador subsequently telling him that Russia had chosen to moderate its response to those sanctions as a result of his request,” the information says.

Flynn resigned as Trump’s National Security Advisor in February, less than a month after taking the post.