During a series of conversations with troops, the topic of North Korea was mentioned, the Associated Press reported.

Mattis continually said the U.S. would rather find a diplomatic solution for the Korean Peninsula, but that if the U.S. needs to take care of the situation militarily, “we expect to make it the worst day in North Korea’s life.”

Troops would need to be “at the top of your game,” Mattis told them. 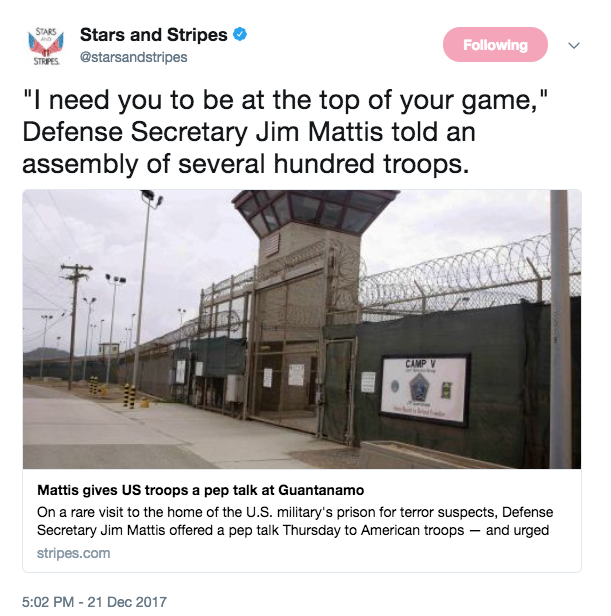 Little progress has been made in the stand-off with North Korea that causes tensions to run high around the globe, as the country led by dictator Kim Jong Un continues to tout its missile program and threaten the Untied States with destruction. Diplomatic efforts to quell the threats and denuclearize North Korea have failed to move the needle on the situation’s urgency.

Kim Jong Un said earlier this month that his scientists would continue making “more latest weapons and equipment” in order to “bolster up the nuclear force in quality and quantity,” North Korea’s state-run news agency said.

The ICBM was launched from Sain Ni and traveled more than 600 miles before crashing into the Sea of Japan, within Japan’s Exclusive Economic Zone (EEZ). The ICBM was in flight for more than 50 minutes.

The missile launch defied international sanctions on the country led by dictator Kim Jong Un, and it drew ire across the globe, as this was the highest missile North Korea has ever launched – reaching nearly 2,800 miles into space.

Mattis has said the missile test went “higher, frankly, than any previous shot they have taken,” and that North Korea can hit “everywhere in the world, basically.”

Mattis was the Pentagon chief who has gone to Guantanamo Bay in nearly 16 years, as Donald Rumsfeld was the last Defense Secretary to visit in Jan. 2002

Mattis visited American troops at the base but did not visit the detention center, which is also home to 41 prisoners. Rumsfeld visited Guantanamo shortly after the terrorist attacks of 9/11, as that was when the military prison was established, to hold suspected terrorists.