Israel’s transport minister is moving ahead with plans to name a new train station that passes under Jerusalem’s Old City and ends at the Western Wall, after President Donald Trump.

Transportation Minister Yisrael Katz told the Yedioth Ahronoth daily on Wednesday that he decided to name the train station after President Trump due to Trump’s decision to recognize Jerusalem as Israel’s capital and to move the U.S. Embassy from Tel Aviv to Jerusalem. 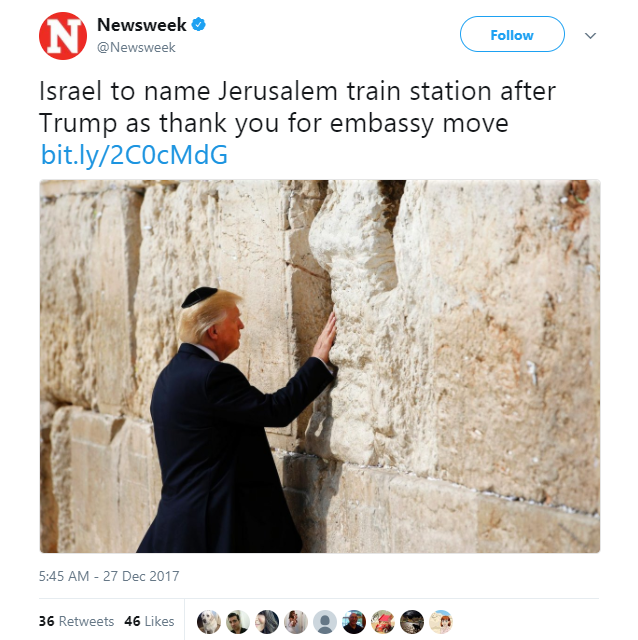 The project, which involves constructing two underground stations and excavating two miles of tunnels, would extend a new high-speed line between Tel Aviv and the Western Wall via Ben-Gurion International Airport and the city of Modi’in.

The Western Wall train station would be located at the Cardo, an ancient street in the Jewish Quarter near the Kotel, just a few meters from the wall, which is the holiest site where Jews can pray.

The cost of the project would be more than $700 million and would take more than four years to complete.

Katz said the plan was moved forward during a recent meeting with Israel Railways executives, with the project being fast-tracked with planning committees.

Last week, 128 countries from the United Nations General Assembly voted in favor of a resolution condemning the new U.S. position on Jerusalem.

Trump said the decision to declare Jerusalem the capital of Israel is “the beginning of a new approach to the conflict between Israel and the Palestinians.”

ISIS threatens attacks on New Year’s Day, the Vatican and the World Cup