Excessive video game playing will soon be classified as a mental health disorder, according to the World Health Organization.

In 2018, people who play an excessive amount of video games may be diagnosed with “gaming disorder”, according to a draft of its 2018 update of International Classification of Diseases. 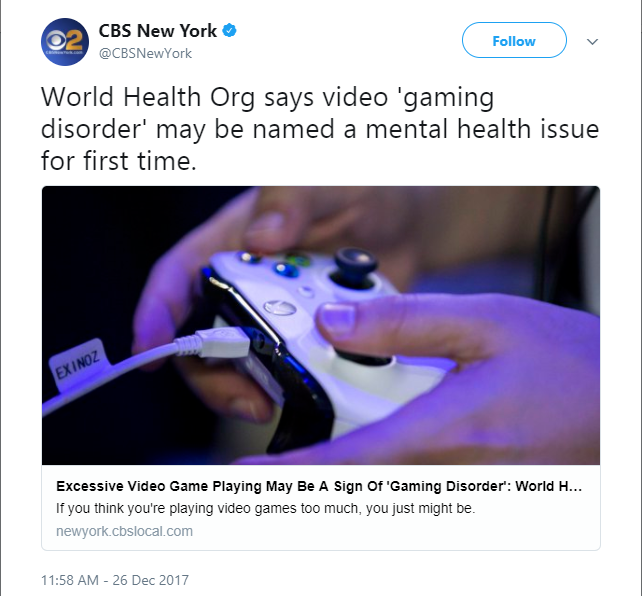 According to the draft, “Gaming disorder is characterized by a pattern of persistent or recurrent gaming behavior (‘digital gaming’ or ‘video-gaming’), which may be online (i.e., over the internet) or offline, manifested by: 1) impaired control over gaming (e.g., onset, frequency, intensity, duration, termination, context); 2) increasing priority given to gaming to the extent that gaming takes precedence over other life interests and daily activities; and 3) continuation or escalation of gaming despite the occurrence of negative consequences.”

“The behavior pattern is of sufficient severity to result in significant impairment in personal, family, social, educational, occupational or other important areas of functioning. The pattern of gaming behavior may be continuous or episodic and recurrent,” the description of the disorder continued.

According to the draft, “the gaming behavior and other features are normally evident over a period of at least 12 months in order for a diagnosis to be assigned, although the required duration may be shortened if all diagnostic requirements are met and symptoms are severe.”

If “gaming disorder” is classified as a mental health disorder, insurance companies and doctors will have to recognize it as such.

A 2009 study found that about 8 percent of Americans from 8 to 18 years old exhibited pathological video game use, Forbes reported.

A final decision on including “gaming disorder” as a mental health disorder has not been made.