While other civilian college students are busy creating safe spaces because of the colors of t-shirts and diverse opinions, throwing tantrums and showing their immaturity, the men and women of West Point and the Naval Academy come together to focus on their mission: defending the United States of America and friendly competition.

Videos have been rolling out from Army and Navy, graduates, units, and even National Security Advisor H.R. McMaster got in on the action. Secretary of Defense Jim Mattis attended the Pentagon Army Navy game pep rally, Senator John McCain and NFL Hall of Famer Roger Staubach appeared in videos and more. Even Ranger Up, the apparel company made a video.

West Point even made a 10 minute mini-movie! You can tell that West Point’s win last year, after 14 straight losses to Navy, has bolstered enthusiasm on the Army side. They clearly want to start their own winning streak this year to make it two in a row.

And of course there are the special uniforms which this year are as epic as ever. The Navy honors the Blue Angels with their uniforms while Army honors World War II’s 10th Mountain Division.

First up is the Army 2017 football entrance video for their entire season. It features soldiers from 2-22IN, 10th Mountain Division and the entire Class of 2020 performing the chant!

Here is the 10 minute mini-movie made by West Point called “Lead from the Front.”

Another spirit video from West Point:

A Spirit Spot produced by Navy Public Affairs Support Element East for the 2017 Army-Navy college football game shows a cadet, portrayed by MCSN Christopher Roys, having a nightmare that Army beats Navy when he sleeps through the game. He suddenly wakes up and turns on his television to see the sports news anchor, portrayed by MCSA Raymond Maddocks, delivering the outcome for the Army vs. Navy game with Navy prevailing.

For an entire semester a group of U.S. Military Academy Cadets attended classes at the U.S. Naval Academy in Annapolis. The Cadets will return home to West Point during a ceremony at the annual Army vs. Navy football game. The return of the Cadets and Midshipmen between the schools is known as “The Prisoner Exchange” and here is a video on it.

West Point also put out this video mocking some of Navy’s old videos.

The Sailors of the Sixth Fleeet show their Navy pride in this video.

And videos flowed in from all corners of the world. Here is one from the 3rd Infantry Division is sending their support for Army West Point Football all the way from Bagram, Afghanistan.

Hundreds of videos are created each year by the academies, companies, graduates, active duty squads and individuals.

Here is a spirit spot production by USS Hopper (DDG 70) with the Secretary of the Navy, Richard Spencer, for the 2017 Army-Navy college football game.

Ranger Up, the apparel company made this video about a son “going Navy.” Ranger Up was founded in 2006 by Nick Palmisciano, a former US Army infantry officer.

Army’s uniforms this year honor World War II’s 10th Mountain Division. Army said, “These soldiers trained at 9,200 feet to learn to fight, and survive, in the most brutal mountain conditions. Bill Bowerman, who would eventually go on to co-found Nike, organized the supplies and maintained the mules for the 10th Mountain Division as a Major in the Army, serving at the time as the commander of the 86th Regiment’s First Battalion.” 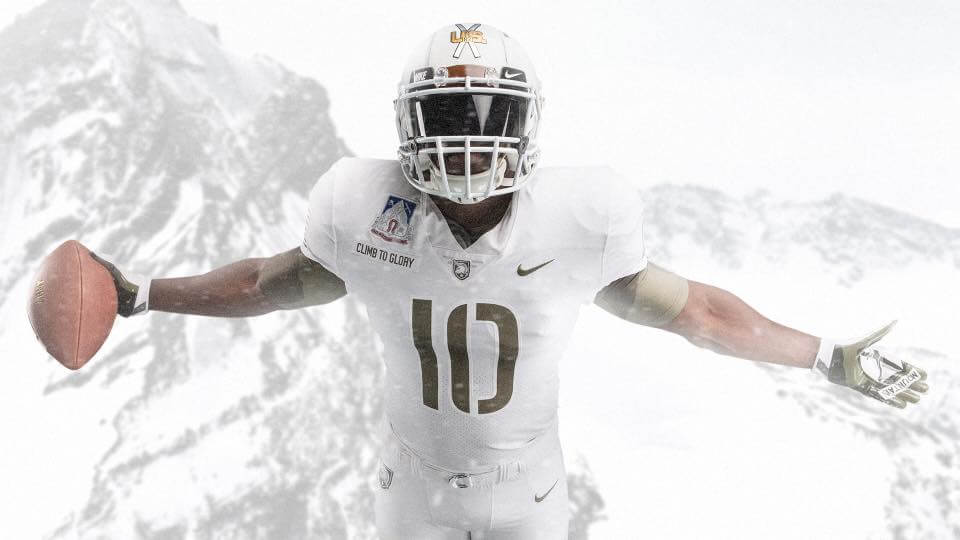 On West Point cleats there is a graphic of a panda. This is a tribute to the origins of the 10th Mountain Division in Pando, Colorado. The patch was worn by the “Pando Commandos” which was their nickname.

The patch on West Point’s uniforms is the division’s coat of arms. The words, “Vires Montesque Vincimus,” translates to “We Conquer Powers and Mountains.”

Navy’s 2017 uniforms are a tribute to the Navy’s Blue Angels.

“This tribute to the Blue Angels reflects the enthusiastic pride and appreciation we have for the Navy’s premier flying team and the motivation they convey to Navy football and the fleet at large,” Navy AD Chet Gladchuk said.

Gladchuk continued, “The masterminds at Under Armour are always thinking of ways to inspire our troops while still reflecting a deep appreciation for a Naval history that is so ingrained in our game day traditions. Annually, a special Navy uniform has become a statement in this game and brings with it appreciated meaning and a clear message that we are all in.” 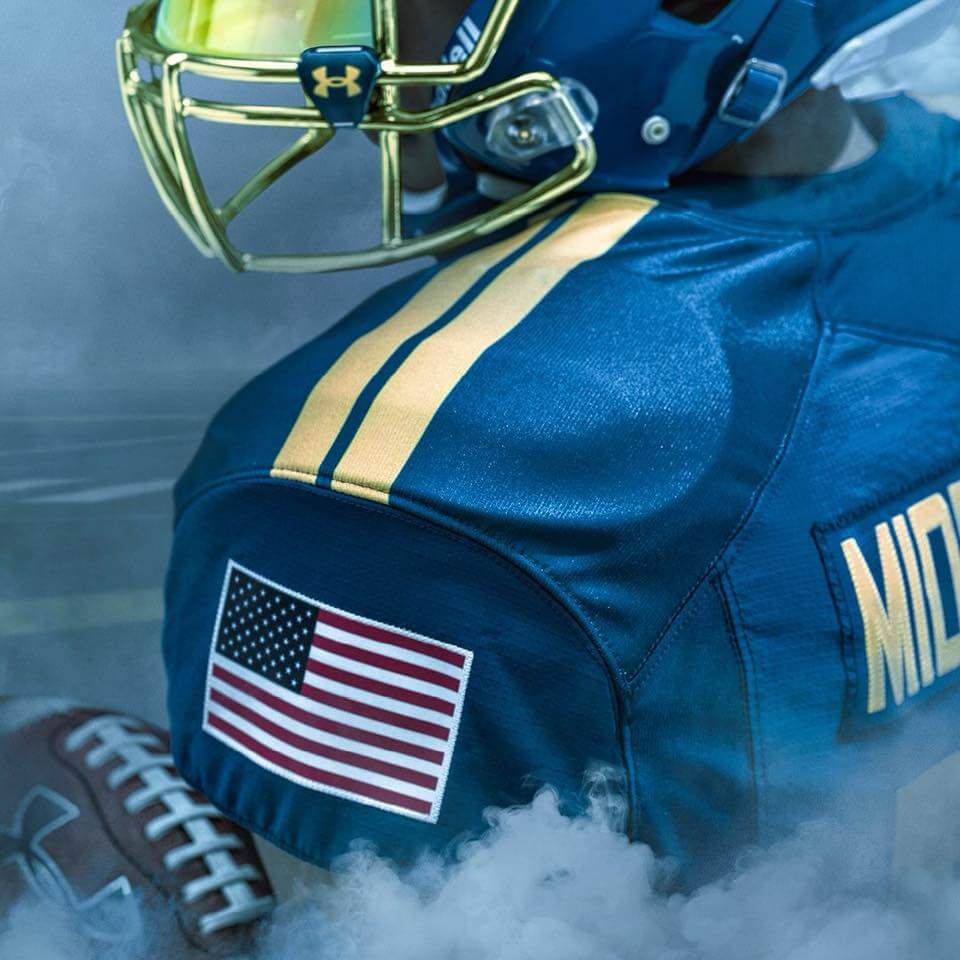