According to Tribal officials, Draper was a recipient of the Purple Heart and the Congressional Silver Medal. As a Navajo Code Talker, he used his native language to help defeat the Japanese in World War II in the Battle of Iwo Jima. 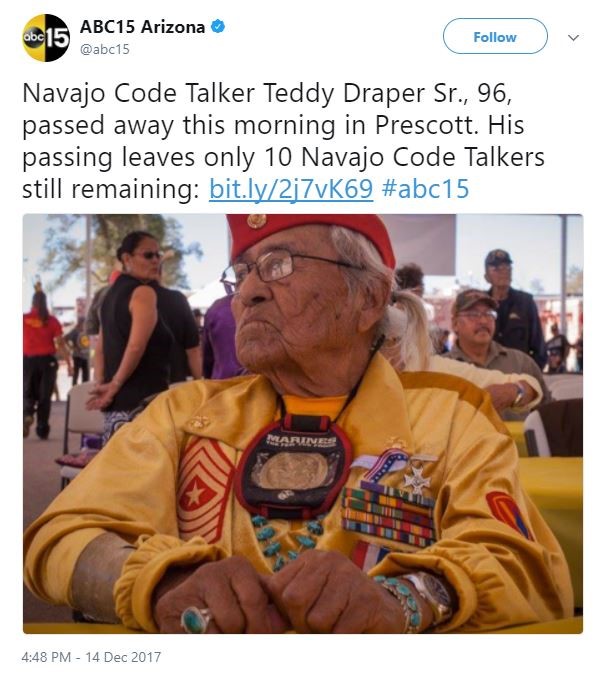 He lived in Chinle, Arizona and passed away in the nearby town of Prescott. In honor of Draper, the Navajo Nation will be flying their flags at half-staff.

The Navajo Code Talkers originated in 1942 during World War II. Secure communications were important for the U.S. armed forces, but their communication channels were constantly breached by sophisticated Japanese cryptography teams. These cryptographers knew English fluently and easily broke their codes. With the valuable information from the broken codes, the Japanese had insight into their enemy’s plans.

The U.S. armed forces were in desperate need of a solution to secure their communication channels. Philip Johnston, who was a civil engineer  developed a solution to use the complex Navajo language to create a communication code. Johnston was a civilian, but he presented his proposal to the U.S. Marine Corps and received supportive feedback. He was directed to continue developing his idea with a team of four other Navajos for it to be applied in a practical use.

Navajo is a unique language that isn’t widely spoken and is difficult to learn and translate. Using the Navajo language in the communication codes created a second communication barrier for the Japanese cryptographers.

In the video below, Roy Hawthorne who was a Navajo Code Talker with the U.S. Marine Corps from 1943 to 1945 expands on how the code talking system works by describing his experience. He mentions that his team developed a code from their ancient Navajo language. Hawthorne continues by mentioning that, “When we got in the military, we had to talk about submarines, bombers, battleships and all types of things for a reconnaissance plane.” The code talkers then created different words to describe their messages. One of the examples from Hawthorne is that him and his team would call captains “railroad tracks.” Then when they said something involving a captain, they would say the word in Navajo, which did not make sense to the Japanese cryptographers.

Hawthorne feels that the Navajo Code Talkers were an instrumental piece in helping win the war against the Japanese.