The U.S. Supreme Court ruled Monday that the President’s long-contested travel ban on six mostly-Muslim counties will be allowed to go into effect. 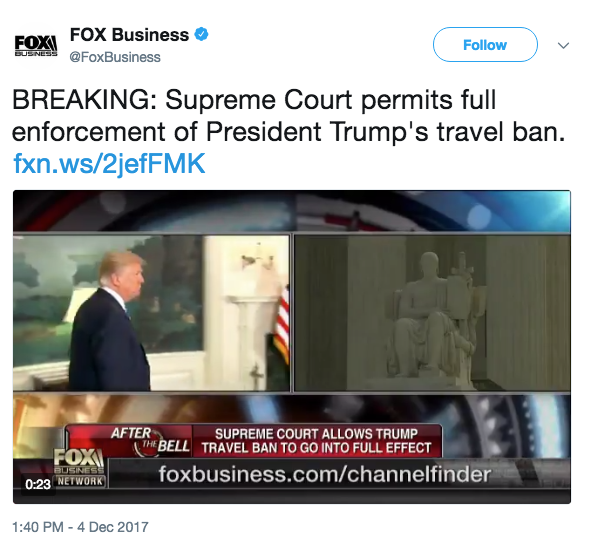 The other seven justices said President Donald Trump’s policy can take full effect “even as legal challenges against it make their way through the courts,” The Associated Press reported, adding that “[this] action suggests the high court could uphold the latest version of the ban that Trump announced in September.”

Lower courts had said “people from the six banned nations with a ‘bona fide’ relationship with someone in the United States could not be kept out of the country, [and] grandparents, cousins and other relatives were among those courts said could not be excluded,” The Associated Press reported.

The September ban targets people from North Korea, Iran, Libya, Syria, Yemen, Somalia and Chad; people from those countries would not be allowed to enter the U.S.

Also, people from Iraq and some people from Venezuela will face a tougher time if they want to enter the country, per the latest travel ban.

These are proposed as permanent restrictions on travel, as opposed to President Trump’s initial 90-day temporary ban that he introduced in March, which temporarily banned travel to the U.S. for people from six terror haven countries.

The previous travel ban put a 90-day halt on issuing visas to citizens from Iran, Libya, Somalia, Sudan, Syria and Yemen. Notably, Iraq was not included.

The order also put a hold on accepting refugees from anywhere in the world for 120 days.

The revised ban was issued in March, after the President introduced a travel ban in January after taking office.

In the new order, the President exempted existing visa holders from the travel ban and also removed Iraq from the original list of seven countries, bringing the number down to six countries.

The President has insisted the travel ban is needed in order to fight terrorism. Many criticized the ban as something that singles out Muslims.

[The dissenting justices] would have left the lower court orders in place.

Both courts are dealing with the issue on an accelerated basis, and the Supreme Court noted it expects those courts to reach decisions “with appropriate dispatch.”

Quick resolution by appellate courts would allow the Supreme Court to hear and decide the issue this term, by the end of June.