Russia has been banned from 2018 Winter Olympics over doping program

The athletes from the Russian Federation entering the stadium at the opening ceremonies of the 2010 Winter Olympics. (Jude Freeman/Flickr)
December 05, 2017 Peter Reid
Share
Tweet
Flip

The International Olympic Committee has punished Russia’s Winter Olympic team by banning them from the 2018 Winter Olympic games in Pyeongchang, South Korea, following a vote on Tuesday, according to a release.

Because of the ban, no Russian officials will be allowed to attend the games, its flag will not be displayed and the country’s anthem will not be played. 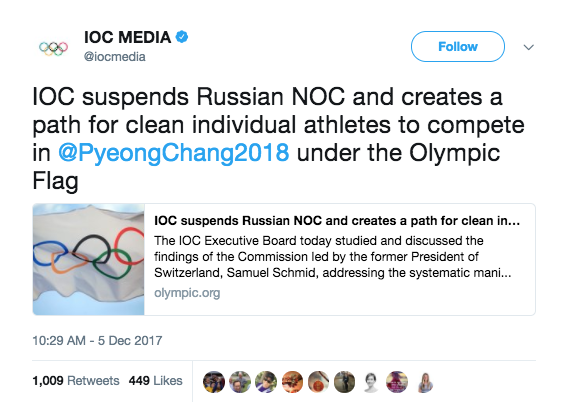 Russia was also ordered to pay $15 million in costs for its involvement in the country’s state-sponsored doping program at the Winter Games in 2014.

At the 2014 Sochi Games, more than 100 urine samples from Russian athletes were tampered with to cover up drug-tainted samples.

The president of the International Olympic Committee, Thomas Bach, said there will be a special ceremony to reassign medals to retroactive winners from the 2014 Olympic games.