A B-52 Stratofortress dropped a record-setting number of precision munitions by a single Stratofortress by using the “conventional rotary launcher” during a strike on Taliban drug labs.

The B-52s from the 69th Expeditionary Bomb Squadron are the first to be outfitted with the conventional rotary launcher (CRL), allowing it to hold eight additional precision-guided munitions (PGMs) in its weapons bays.

“Combined with PGMs carried on the wing pylons, the CRL allowed the B-52 to carry more PGMs than any previous mission,” Lt. Col. Damien Pickart, a spokesman for U.S. Air Forces Central Command, told the Washington Examiner. “These guided munitions allowed us to effectively destroy the targets while mitigating the risk of collateral damage and civilian casualties.”

Bunch said that since the new Afghan strategy to target Taliban drug labs on Nov. 20, 25 drug processing labs have been destroyed. 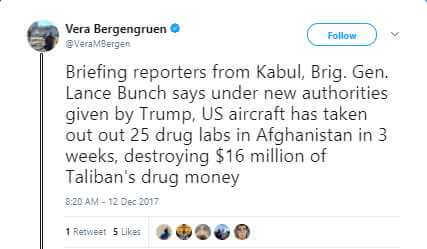 “This equates to almost $80 million of drug money eliminated from the kingpins’ pockets, while denying over $16 million of direct revenue to their Taliban partners,” Bunch said.

Gen. John Nicholson said there are 400 or 500 drug labs across Afghanistan. The Taliban taxes poppy farmers and traffickers, allowing them to make roughly $200 million every year.