An unidentified undercover police officer who was shot multiple times by a teenager and survived, taunted the now-21 year-old man by bringing K-Y Jelly to the sentencing hearing, the Florida Times-Union reported. 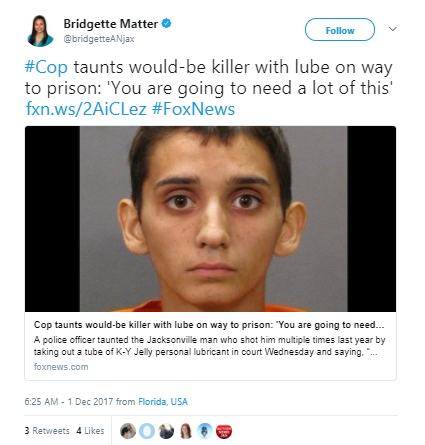 Kevin Rojas shot the unidentified police officer, who is also an Army veteran, three times, including one time in the face, during a traffic stop in 2016. The officer was taking his son to school when he noticed the driver of a white Cadillac driving recklessly on the streets.

During the stop, Rojas fired at the officer and hit him through the windshield. The officer’s son was uninjured.

According to the Times-Union, Rojas stole a truck and barricaded himself inside his home after crashing his vehicle into his neighbor’s home. Rojas was then shot by police officers after he pointed a gun at them through a sliding glass door.

Rojas was sentenced on Wednesday to life in prison, plus additional years for the lesser crimes.

“I will take those bullets instead of a fellow officer and an innocent bystander,” the unidentified officer said in court. “When I brought the fight back to you, you ran like a coward.”

The officer then produced a tube of K-Y Jelly, telling Rojas: “You are going to need a lot of this,” the Times-Union reported.

The officer said “no comment” when asked about the K-Y Jelly.