Attorney General Jeff Sessions has launched a review of the law enforcement effort following a report that alleged the Obama administration stymied an investigation into Hezbollah’s drug-trafficking and money-laundering operations in order to avoid jeopardizing the plans for the Iran nuclear deal.

The Department of Justice was ordered “to evaluate allegations that certain matters were not properly prosecuted and to ensure all matters are appropriately handled,” the agency said in a statement, according to The Hill.

On Friday, Jeff Sessions ordered a review of prior Drug Enforcement Administration investigations “to evaluate allegations that certain matters were not properly prosecuted and to ensure all matters are appropriately handled,” Fox News reported.

According to the report, the Obama administration tried to stop a Drug Enforcement Agency investigation, known as Project Cassandra, into Hezbollah’s criminal activities.

“As Project Cassandra reached higher into the hierarchy of the conspiracy, Obama administration officials threw an increasingly insurmountable series of roadblocks in its way, according to interviews with dozens of participants who in many cases spoke for the first time about events shrouded in secrecy, and a review of government documents and court records,” the report read. “When Project Cassandra leaders sought approval for some significant investigations, prosecutions, arrests and financial sanctions, officials at the Justice and Treasury departments delayed, hindered or rejected their requests.”

“While I am hopeful that there were no barriers constructed by the last administration to allowing DEA agents to fully bring all appropriate cases under Project Cassandra, this is a significant issue for the protection of Americans,” Sessions said in statement, according to Fox News. “We will review these matters and give full support to investigations of violent drug trafficking organizations.”

A number of lawmakers have come out wanting answers to the report.

“I’m glad AG Sessions ordered a review of the #Obama admin’s relationship with #Hezbollah, so we can get answers to the questions my colleagues and I in Congress are demanding answers to,” Ratcliffe tweeted. 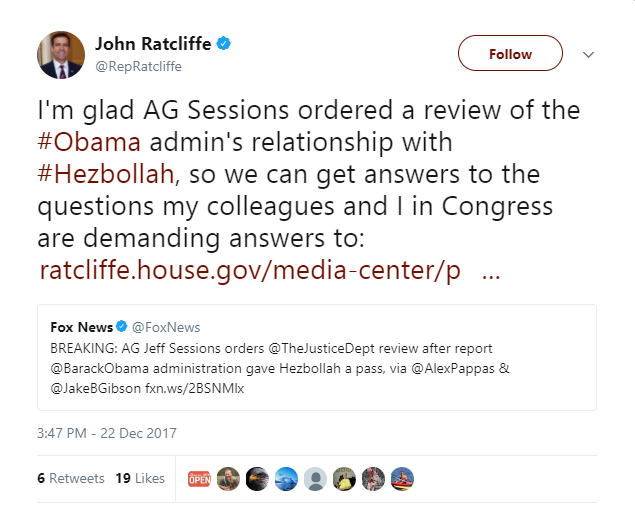 However, former officials have denied the allegations, saying the reporter had a political agenda.

“The narrative presented in this report in no way resembles reality. The Obama administration said time and again that the nuclear negotiations with Iran were confined exclusively to that narrow issue. We did not make concessions in other arenas, and we most certainly did not curtail or attempt to influence any active investigations, including by the Drug Enforcement Administration. To the contrary, we aggressively countered Hezbollah’s terrorist plotting and other malign activities before and after the Iran deal came to fruition and while it was being negotiated. Any allegations to the contrary are false, and those reflected in the story appear to be from former low-level officials who have since gone on to work for organizations ideologically opposed to the Iran deal, something Politico failed to disclose. Politico, despite repeated offerings, also failed to avail itself to input from former senior Obama administration officials, suggesting the reporter had an agenda and narrative from the start.”