At least 41 people were killed and dozens injured Thursday during a suicide bombing at a Shiite cultural center in Kabul, Afghanistan.

ISIS has claimed responsibility for the attack, according to reports.

The attack occurred at the Tabayan center in a Shiite neighborhood, where hundreds of people were commemorating the anniversary of the Soviet invasion of Afghanistan in 1979. 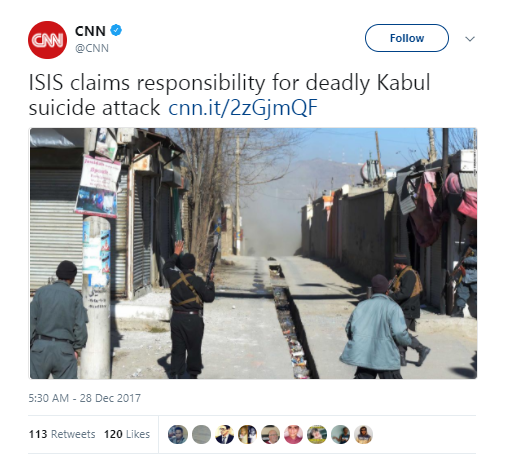 Waheed Majroh, a public health ministry spokesman said 41 people were killed and 84 were injured in the attack when a person detonated a suicide vest, the Washington Post reported.

Those injured were rushed to hospitals, many of which suffered burns from the explosion.

The attack also hit the Afghan Voice News Agency which was in the floor above. Two more blasts occurred at the building, but no one was injured.

“I have little doubt that this attack deliberately targeted civilians,” said Toby Lanzer, the acting head of the U.N. assistance mission in Afghanistan. “Today in Kabul we have witnessed another truly despicable crime in a year already marked by unspeakable atrocities.”

“Terrorists always hide their defeat against our security forces by attacking mosques, religious places, and educational institutions, and killing our people, including women and children,” he wrote. “Terrorist groups and their supporters should understand that by doing such crimes they cannot gain success. Day by day, our peoples’ hate increases as everyone recognizes them.”

There are rising fears that ISIS is trying to start a Sunni-Shia sectarian war in Afghanistan because the terrorist group is a militant Sunni extremist group that considers Shia apostates.

The cultural center is believed to support Iran as it contains pictures of the country’s leader during gatherings, the New York Times reported. According to the paper, people at the gatherings stomped on Israeli flags and burned pictures of President Trump.

ISIS has claimed several attacks since October in Kabul, amounting to more attacks than the Taliban since then.