Watch footage of the Navy drawing a penis in the sky

Footage of two Navy lieutenants drawing a penis in the sky over Washington has emerged.

Officials at Naval Air Station Whidbey Island admitted that one of their aircraft was responsible for skydrawing a penis over Washington state last week, KREM2 reported. 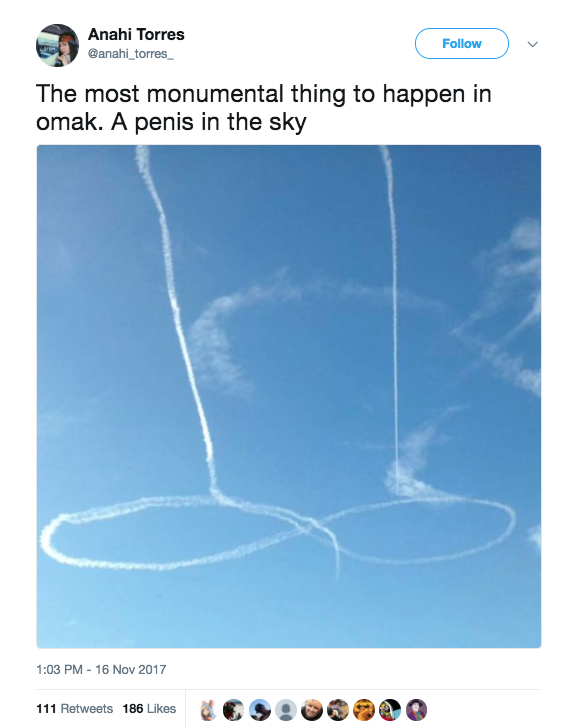 The two lieutenants, who have yet to be identified, were using an EA-18G Growler to draw the penis in the sky.

A mother in Oregon complained about the images to KREM2, saying that she was upset she may have to explain to her children what the drawing was.

“The Navy holds its aircrew to the highest standards and we find this absolutely unacceptable, of zero training value and we are holding the crew accountable,” the Navy said in a statement to KREM2.

The Navy has since grounded the two lieutenants responsible for the skydrawing.

“The actions of this aircrew are wholly unacceptable and antithetical to Navy core values” a statement from Naval Air Station Whidbey Island read. “The Navy apologizes for this irresponsible and immature act, and anyone who was offended by this unacceptable action.”

“Sophomoric and immature antics of a sexual nature have no place in Naval aviation today,” Vice Admiral Mike Shoemaker said in a statement. “We will investigate this incident to get all the facts and act accordingly.”

Here are two videos of the Navy lieutenants skydrawing a penis: