All U.S. service members on Okinawa, Japan, are now restricted to the base and their residences, and they can’t consume alcohol, following a deadly incident over the weekend. And, service members on mainland Japan are prohibited from consuming alcohol on- or off-base, as well.

The alcohol ban comes in the wake of a deadly car accident over the weekend there, and it is not the first time the Military has banned alcohol for service members on Japan.

United States Force Japan reported that there was an accident on Sunday morning, and a local Okinawan man was killed after he was hit in his vehicle by a truck being driven by an American service member.

“Alcohol may have been a factor,” the United States Forces Japan (USFJ) Public Affairs Office said in a statement Monday.

Japanese police reported that the service member had three times the legal limit of alcohol in his blood at the time of the crash, according to Business Insider. 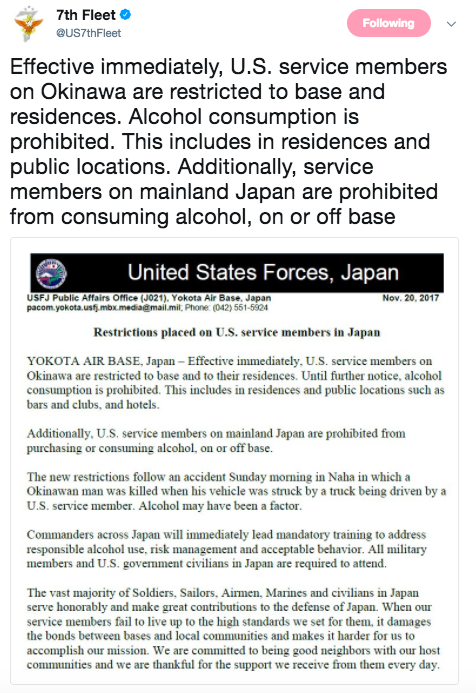 Effective immediately, U.S. service members on Okinawa are restricted to base and to their residences. Until further notice, alcohol consumption is prohibited. This includes in residences and public locations such as bars and clubs, and hotels.

Additionally, U.S. service members on mainland Japan are prohibited from purchasing or consuming alcohol, on or off base.

The new restrictions follow an accident Sunday morning in Naha in which an Okinawan man was killed when his vehicle was struck by a truck being driven by a U.S. service member. Alcohol may have been a factor.

Commanders across Japan will immediately lead mandatory training to address responsible alcohol use, risk management and acceptable behavior. All military members and U.S. government civilians in Japan are required to attend.

The vast majority of Soldiers, Sailors, Airmen, Marines and civilians in Japan serve honorably and make great contributions to the defense of Japan. When our service members fail to live up to the high standards we set for them, it damages the bonds between bases and local communities, and makes it harder for us to accomplish our mission. We are committed to being good neighbors with our host communities and we are thankful for the support we receive from them every day.

There are about 50,000 U.S. troops in Japan, and half of them are stationed on Okinawa.